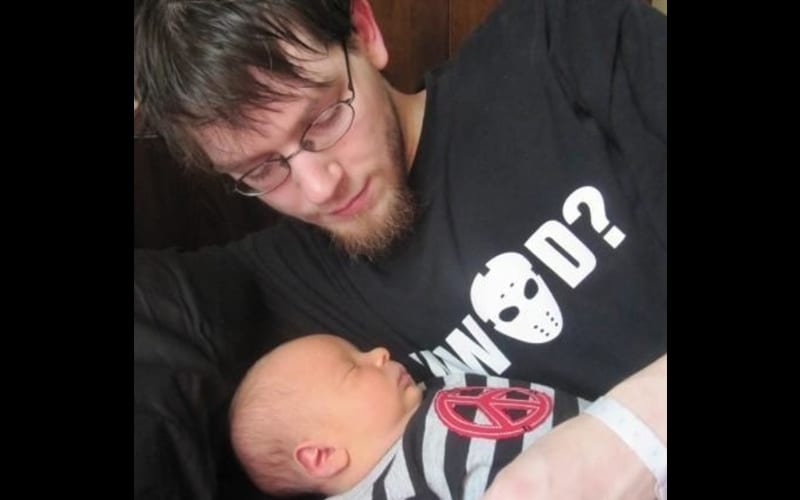 We have a sad story to report as an indie wrestler is in very poor health. Now his family is looking for help.

Janine Topp, ex fiance of Adam Bueller revealed that he has possibly less than one week to live. The couple have a 10 year old son together and this is a very uncertain and scary time.

She was told 7 days ago that Bueller was almost cancer free. Then he went to the hospital just 5 days later, and he told that his cancer is back in “full force.” Now he may have less than a week to live.

A Go Fund Me has opened up to raise money for what is to come. There is a very lengthy detailed description on the account which you can find below.

Today has been an incredibly stressful and sad day: In 2005, when I was 16 years old, I met a guy who I ended up falling very deeply in love with, very quickly, who ended up being my boyfriend for the next almost decade of my life, the father of my first born, our son, Camron, my first fiancé, and the first man I would end up living with and helping mold my personality growing up as we had spent the last half of my teens, and the first half of my 20’s together every single day as if we were married. I’m not going to lie to anyone and tell you our relationship was perfect, or amazing, or that we were so happy and passionately in love with each other. Because that would just be a down right lie.

Did we love each other? Absolutely. We were both awkward, weird, liked the same dumb stuff, bounced off of each other’s sense of humor, we both were convinced that we held the world record for people who said the word “Fuck” the most, and is the only person I could safely say probably has me beat on that, and to this day, he is the only person who I had ever been 100% comfortable with, like, he has truly seen every side of me, the good, the bad, and the ugly. But we did have a lot of years that we were very unhappy, we had hellacious fights, some which escalated out of control, we had our problems just like every other relationship, I had horrible insecurity and jealousy issues, because I was, as I mentioned, still a kid, and also extremely overweight at the time so I was always hard to deal with when I went into a random jealousy rage.

He had anger issues and was a cynical asshole with a sarcastic mouth, so yeah, we would half full blown wars with every fight. The last couple years of our time together we were very on and off and through a series of painful decisions and break ups and reconciliation repeating, we finally came to the decision that we were just too toxic to be in a relationship together…. but we made that decision a lot more loud and a hell of a lot more angry…. but over the years, we found our way back to each other a lot of times and we truly did have a hard time letting the other go until we finally figured out that we really just valued each other’s friendship and we just weren’t good in a relationship together.

Although we haven’t been “in love” in a very long time, I have always loved him as my best friend and the father of my child. He has been there for me even when it was difficult for him to be. He would help me with relationship issues even when he was still in love with me.

When my daughter was born, and her father was too busy cheating on me with the woman he left me pregnant and alone for my entire pregnancy, he was there holding my hand though my labor, watching my daughter be born, and helping me raise her. To this day, he has treated Aubri as his own daughter. He takes her fo no his visitation time with Camron, when he really had zero obligations to her.

As a lot of you may know, Adam Buell has been battling with cancer for a few years now. Starting off with lymphoma and then ending up with leukemia. It’s been a very long roller coaster of a battle. He was waiting on the leukemia to be in remission In order to get a bone marrow transplant and rebuild his extremely compromised and non existent immune system.

He was going REALLY well the last few weeks, and even his doctors were very confident that he would soon reach remission from a second form of cancer. Unfortunately, Adam started experiencing high fevers once again and horrible sickness, he couldn’t see the kids and could barely get out bed. This morning I got a text saying that he had been admitted back into the hospital.

And received another text saying, “Everything seems to have just give wrong all at once. I’m having a hard time breathing, still having fevers, my vision is blurry, my stomach is protruding, I can’t sleep, and my nose is super stuffed up and there’s a ton of dried blood in both nostrils. Something is very very wrong. I just overheard my blood counts are tanking and my white cell count shot up even more since Monday. I’m honestly getting pretty scared. I just got told I might not make it through this”. A short time later, I receive another text “My doctor just came to see me from Westville.

He said my cancer is out of control and that there isn’t anything they can do for me except keep me comfortable. They’re going to move me to hospice in Valpo in the next couple of days, but he told me at some point I’m going to fall asleep and just not wake up sometime within the next week. “ My heart sank and I immediately started crying. Not only because the guy who had been closest to me for the last 15 years just told me it’s likely he will not make it, but also because I had to think about my 10 year old son. My autistic 10 year old son. Who is so innocent and pure and so obsessed with trains and presidents that is doesn’t really process or understand what death is. Who constantly asks to see his dad and go to his house and I’m going to have to tell him no from now on and he just won’t understand why. It’s sad, it’s maddening, and it just isn’t fair that life is this way. I’m scared.

For him, I’m scared for me, and I’m scared for my son. For those of you who pray, we sure could use it right now. I’ve been crying on and off all day. I’ve been scared of answering my phone in fear of it being the hospital telling me something happened. I’m scared that telling him goodbye and having my son hug him is going to be the last time.

If there is a god out there, please send and miracle. Please don’t let my son have to go through life without his dad. Adam was mostly known for his time in the wrestling business, and has many many friends and family throughout the wrestling community from coast to coast.

He has been an inspiration to many, and an enemy to….some…but probably not as many as he should be….. because he always used his sarcastic wit to diffuse a situation. I’ve known him under so many names, Adam, Joseph (his real name, which he hates) the SiKness (ironic), Adam Bueller, the violent gentleman, pookie, but regardless of the name he was called, he was always pretty recognizable by his loud distinctly recognizable voice, his dumb jokes, his outrageous and obnoxious outbursts during wrestling matches, and his willingness to participate in almost any crazy thing that the wrestling business would throw at him.

Wrestling was the only thing that I ever truly felt he loved more than me, and to touch so many lives in the wrestling business and too see how many lives he impacted and see all the outreach on his page. Although the tried to make himself seem like he was an asshole who could give a damn about human life, anyone who really knew him, or even got somewhat close to him, knows that he is full of compassion and would help anyone that needed it within his power and truly cared about everyone that he become friends with.

Although he will tell you he is socially awkward and shy, he was typically always the loudest of our groups and he could start a conversation with anyone, and he is such a likable personality, that it wasn’t hard for him to make friends. I feel like being the closest person to him and the closest thing he has ever had to family, being the mother of our son, and being left with the responsibility of raising our son without him; that it is my responsibility to try to set up his funeral arrangements, unfortunately I am not financially in a great place right now. I would love nothing more than to have a funeral to have all of his friends and fans gather and celebrate his life once this happens. Although we are praying hard for some sort of miracle that he can pull through and forget this ever happened, but we need to be prepared.

Please donate if you can, if money is left over after funeral costs, I will transfer additional funds into a savings account for our sons education and his disability needs. Please help. This is absolutely killing me to write this. I will always have love for him and it breaks my heart completely to have to say goodbye.

Our thoughts are with everyone involved in this situation. Hopefully, Adam Bueller will go back to the doctor and he will get much better news very soon.