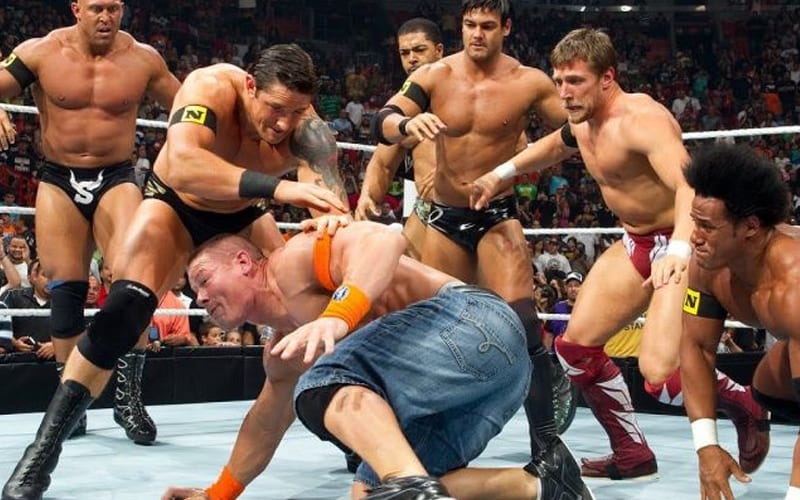 The 10 year anniversary of the Nexus’ debut is upon us and now fans can look back and wonder “what if.” The faction had a lot of momentum, but they were eventually done away with. Now there is a chance of a Nexus reunion on the indies.

Inside the Ropes recently spoke to Stu Bennett about his time as Wade Barrett in WWE. He revealed that Vince McMahon gave Nexus orders to destroy everything during their debut. They were given armbands with an “N” on them, but they weren’t told what that meant either.

These were very vague directions from Vince McMahon, but they went on to help create a memorable moment in WWE history.

“Vince speaks to us, he says, ‘OK, this is a huge opportunity for you guys, this is going to be big, we want you to go attack John Cena at the end of the show and smash everything up, here’s what I want you to do, I want you to wear these armbands with the little N on there,’ didn’t give us a reason why we were wearing the N, didn’t give us the name Nexus or anything like that, said, ‘Put these on, Wade you go down, everyone else join him, smash up everything, I want you to rip the ring apart, I want you to trash the table, I want you to punch the security guards, punch the referees, punch Jerry Lawler, beat up Justin Roberts.”

You can never say never in WWE. The company still owns the Nexus name, so they could always call up a half dozen NXT Superstars to wreck things once again.

Hopefully, Vince McMahon will give a new incarnation of Nexus a bit more direction if they do decide to revisit the idea.