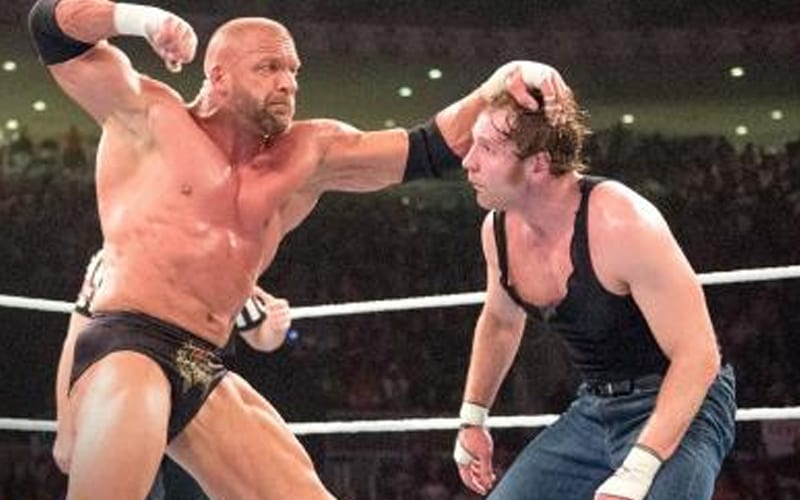 Triple H is widely regarded as the Cerebral Assassin for a reason. His matches generally consist of a psychological element that is unique to him. Jon Moxley remembers the first time he wrestled The Game in a singles match and how interesting the entire experience was beforehand.

While speaking with My Mom’s Basement, Moxley discussed working with Triple H. Prior to their first contest together he didn’t want to break the ice regarding what they were going to do. He considered it something that showed weakness, but finally, Triple H was the one who asked Moxley what he wanted to do in their match. It didn’t take long for them to figure things out.

“I’d always heard so much about how he’s the great ring general and all this and that. And I worked with him in six-mans and stuff before, but never just got in the ring with him and didn’t say a word, and see what happens yet. And what I was taught, if you got caught in the ring going over a spot before the show by like Les Thatcher, it was looked at as like a weakness. Which is the exact opposite of the way the business is now, but that’s the way I was brought up. You call it in the ring, just work, build it from the ground up. And you know, it takes a different level of patience, just a different style of match. So I think I’m pretty good at that, and this guy is supposed to be like, the Harley Races and Ric Flairs say that this guy is like the new top ring general. So like, ‘Okay dude, let’s see what you got.’”

“So I remember I showed up really late. And there’s this weird gamesmanship that goes on with old school worker type stuff. It’s kind of like playing chicken or having a stare-off. Nobody wants to be the first guy to blink. Nobody wants to be the first guy to look like, ‘So what are we gonna to do, what’s our spots?’ ‘What do you wanna do?’ ‘I dunno. What do you wanna do?’ “Let’s just call it out there.’ Nobody wants to be the first guy to blink and be like, ‘I’m the inferior worker of the two of us.’ So I got there really late and just hung out in the locker room. And then it was finally like 5:30 or 6:00, something. And Michael Hayes is looking for me, ‘Hunter is in his locker room and wants to talk.’ I’m like, ‘Okay.’ So I go there and he’s like, ‘What do you want do?’ I’m like, ‘Whatever you want to do.’ We basically came up with a finish, then a table spot I had done before, and a cool a false finish. The rest of it, we basically called in the ring.”

Triple H defeated Dean Ambrose at Roadblock in 2016. Their match might not be remembered by a ton of fans, but Moxley won’t forget the backstage situation prior to locking horns with The King Of Kings.