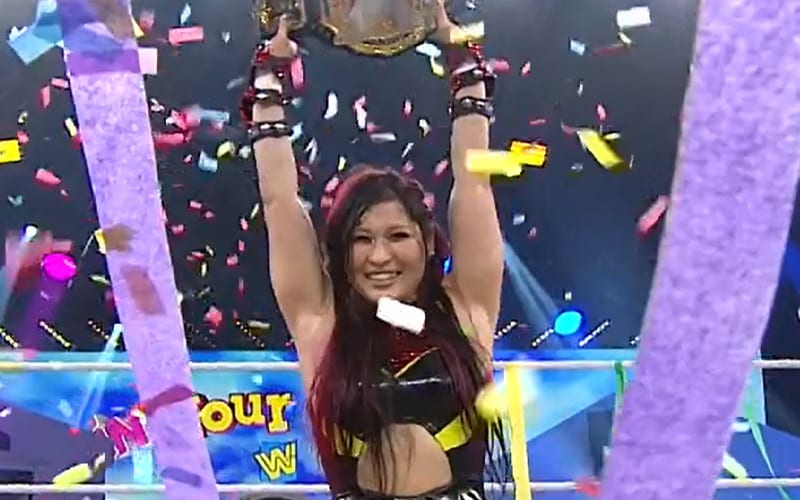 Io Shirai finally climbed to the top of the mountain at NXT. She is the new women’s champion, and she has a lot to be proud of.

Click here for our complete coverage of NXT TakeOver: In Your House.

She had a lot of people to thank as well. The new NXT Women’s Champion posted a picture of herself with the gold along with a message thanking fans and everyone else for their continued support.

At last, I can call myself champion.
When I think about the tough & painful times, I was able to achieve this, largely in part to your support!

I am truly grateful for everyone who gave me courage.
From the bottom of my heart, thank you so much!

Io Shirai also posted a picture with Triple H and she included a caption discussing how important this night was in her career. She also praised WWE for pushing her regardless of her race.

I have nothing but the utmost respect & gratitude for WWE, who always believed I could become a champion, regardless of race or nationality.

Tonight, my chance finally arrived.
I don’t have a tag partner, but I definitely have a wonderful family & home.

She then addressed her fans in Japan in a tweet translated to English:

For Japanese people, I think it was a long time to be crowned But in the meantime, we have accumulated irreplaceable experience and trust, and as a result, we have become a champion that is celebrated by fans and WWE officials around the world. From now on, we will continue to steadily and steadily build a road aiming for “up”! 2020.6.7,

This was a huge win for Io Shirai. We also have to wonder how much longer she will hold onto her title, especially with recent reports that she is under consideration for a main roster call-up.