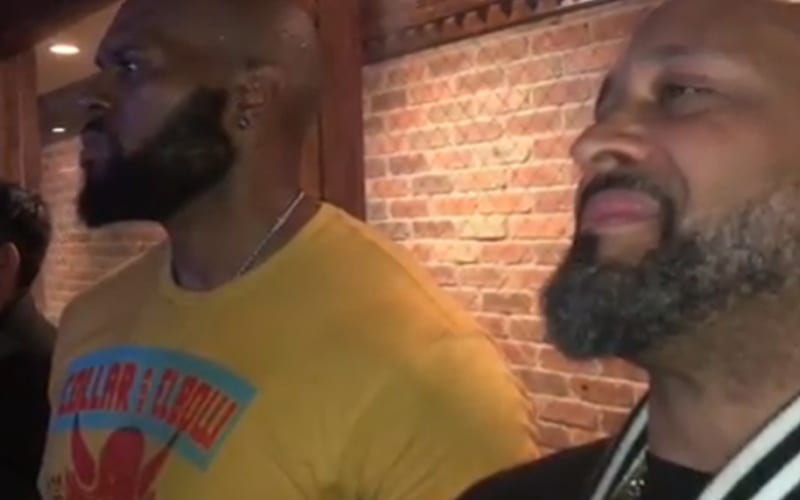 As Kofi Kingston captured the WWE Title, Shad Gaspard and MVP were watching at a sports bar. The moment Gaspard and MVP had as they celebrated their friend’s big win was very emotional, and Shad Gaspard later released it on social media. MVP wasn’t too happy about that.

While speaking to Chasing Glory, MVP admitted that he was upset at Shad Gaspard for uploading that famous reaction video. Then he started to see the response the video brought out of the fans. Tons of people felt the same way Gaspard and MVP did about seeing Kofi Kingston pull down the WWE Title. The outpouring of support was enough to change MVP’s tune.

“I was very upset with him for doing that, yeah. I felt upset because that was a private moment. That wasn’t for public consumption. That wasn’t for the dirt sheets, or whatever and you know, I know Shad is very ambitious and he likes to do the social media thing and at first I was kinda hot like ‘don’t post that sh*t for likes.’ That was a moment.”

“I was just angry about it and I let him know about it. I hit him up and said, ‘that’s bullsh*t, man.’ When I saw the response to the video and I saw what people were saying and when I saw people say what it meant to see Kofi win the WWE Championship to us.

MVP said he remembers when Kofi Kingston arrived in FCW’s developmental program. He also admitted to being humbled and flattered by Kofi saying that he was one of the first people to accept him at a time when not too many people were being nice.

It meant a lot to see Kofi Kingston win that title as MVP called it a huge moment to see Kofi defeat Daniel Bryan at KofiMania.