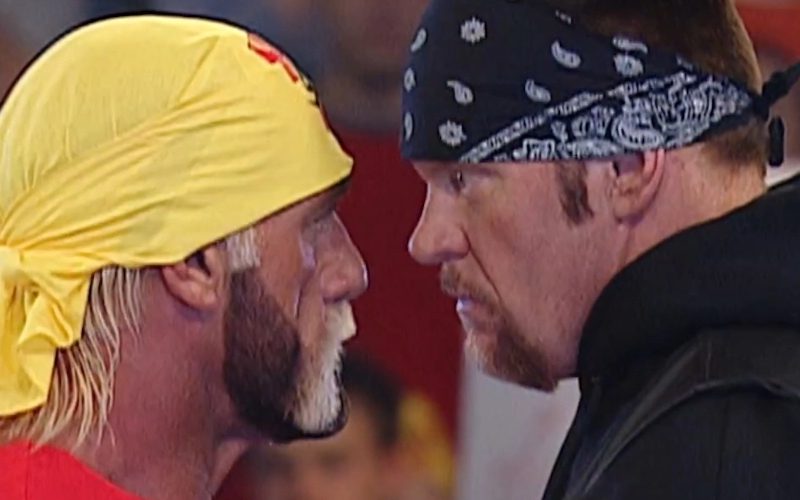 Hulk Hogan is a polarizing individual. It’s not Hulkamania anymore and public opinion is split about the Hulkster now. The Undertaker remembers Hogan’s 2002 WWE return well, but they weren’t “overly friendly.”

CM Punk readily admitted that he liked him even less after meeting the two-time WWE Hall Of Famer. The Undertaker recently discussed Hogan with ESPN. The Deadman seemingly called out Hulk Hogan for lying about a neck injury that he claimed to suffer at Survivor Series in 1991.

Finally, I got to San Antonio, I was like, “Terry, I watched it back, your head never hit!” He’s like, “Brother, what it was is you had me so tight, that when we came down, I had nowhere to move, and that’s what jammed my neck. I couldn’t move at all.” At that point, then I was like, ‘Okay,’ I kind of realized I know what you’re all about, and that’s all I needed.

When it came to their friendship, there was never really anything there. In fact, The Undertaker displayed a bit of cautiousness when interacting with Hogan.

“I was not overly friendly, but I did, you know, if he was in the building, I always made sure to say hello, and engage him in conversation. But, you know, l’ve always, like I said, from that Tuesday In Texas, when I got that answer, I knew all I needed to know about him. And then, you know, that’s the way it’s always… my radar was always up, anytime I had to interact with him.”

The Undertaker knows how to work his way around the backstage area. He also realizes that there are other savvy operators around WWE and Hulk Hogan was certainly one of them.