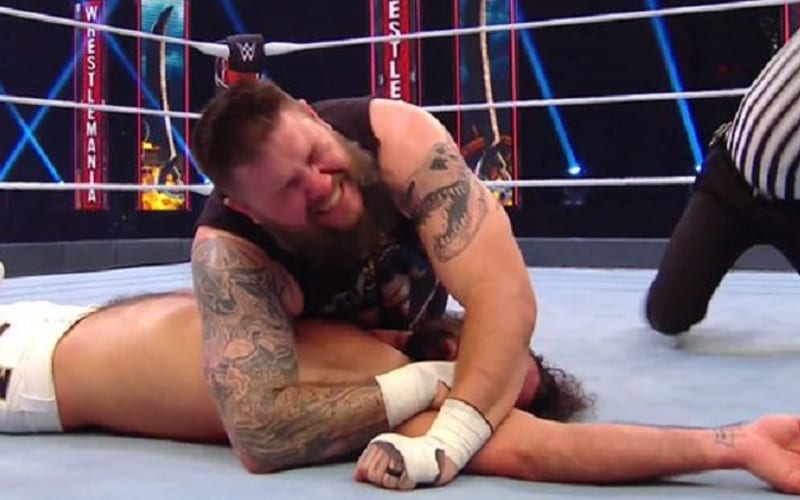 During After The Bell, Seth Rollins discussed the process leading up to WrestleMania 36. Rollins and Kevin Owens were tasked to light up a match that was nowhere near the top of the card. They knew that they needed to bring it, but the uncertainty of having no live crowd for WrestleMania was also a concern.

“We were dealing with a lot of craziness, and look, no bones about it, Kevin and I weren’t the marquee match-up on the show. We weren’t. You had Undertaker-AJ Styles, you had Bray-John Cena, you had Roman and Goldberg, initially, and turned into Braun and Goldberg, and Edge and Randy. You had these other high-profile matches, Becky and Shayna. We just weren’t at the top of the list. Like I said, I was extremely happy with the finished product that we were able to put on between having a five-month story that turned into what it was, and we were able to have, what I thought, was one of the standout, I can’t put up there with that dang Boneyard match, but from an in-ring perspective, it was pretty good with no crowd.”

That match included a high spot that saw Kevin Owens take a leap off the WrestleMania sign onto the Monday Night Messiah.

Seth Rollins said he had no idea what the WrestleMania set looked like or if there was a way to get on the Mania sign. Then Kevin Owens was able to perform his perfect dive off that WrestleMania sign to create a moment nobody will soon forget.

“You don’t realize how big it is, until you’re laying down there underneath Kevin, who’s like a giant dude. I remember walking in there that day because I didn’t know it was gonna be there. I didn’t know what the WrestleMania set to his going to look like. I didn’t know what they were going to do. The fact that they even got that sign in there, I thought, was impressive. Then I was laying there, and I was looking up at Kevin like, ‘oh, this is a terrible idea. This is no good.’ And you can hear me physically wheezing because there’s no crowd. It’s just me going [Seth makes wheezing sounds] like just dry heaving.”

“I thought he broke my ribs. He elbowed me. I mean he landed perfect, but he hit me so hard, and he’s just a big boy, so he smashed me right in that rib cage. Luckily, only knocked the wind out of me but that sucked. That was one of the worst. I’ve been on the other end of that. I’ve been the one doing the jumping, but not from that height before I don’t think. So that was just kind of one of those grit your teeth moments as Nigel [McGuinness] would say.”

Kevin Owens was able to put a stop to Seth Rollins at WrestleMania, but their feud might be far from over. They left it all in the ring at the show of shows.