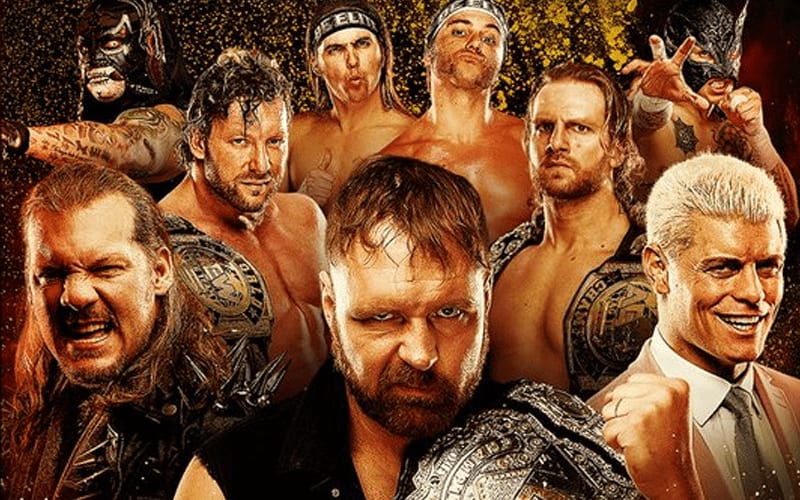 Also teased for tonight is MJF in action, and Lance Archer appearing alongside Jake Roberts. And we’re less than two weeks away from the Double Or Nothing PPV, so it should be full steam ahead.

Follow along here and on the Ringside News app. Enjoy the show!

This week’s Dynamite opens with Lance Archer beating some stagehand towards the ring as Jake Roberts comes behind, laughing.

Roberts says he has been asked to apologise but she can kiss his ass first. He says everything is fair game when you step into the ring, it’s no man’s land. This is their story and they’re writing the chapters. And as far as he’s concerned, women are great at home for wiping baby’s butts, cooking, cleaning, and keeping men warm. Roberts says watching Archer gets him randy. He turns his attention to Cody but as he’s talking we hear an engine revving.

We see a black SUV with Cody’s insignia on the hood. Cody is nicely dressed in the driver’s seat and he revs the engine before driving forward a few feet and neatly knocking over some guard rails. Cody hops out and Archer runs over to fight him. Cody low blows Archer and unloads on him but Archer quickly turns the tables and throws him over the guard rail onto a small table.

They fight to ringside and Cody slams Lance into the ring post. Archer slams Cody on the apron but Rhodes grabs his ponytail and pulls it. Cody rolls into the ring and grabs a chair, throws it Archer, but eats a big boot. Cody counters the claw and attempts a Cody Cutter but Archer pushes him off, then retreats with Roberts.

Jim Ross and Co. run down the card for tonight’s show, including Brodi Lee Vs. Christopher Daniels in the main event. We get a lengthy promo to hype the tag team division.

We start the match with Jungle Boy and Chuck Taylor, and they lock-up, with Perry taking him down in a side headlock. Jungle Boy counters Taylor over and over, then they exchange arm drags and a quick hand slap of respect.

Luchasauras and Trent tag in, and the dino shoves him down. Luchasauras then unloads some chops and Trent gets mad. Trent drills the dino with forearms and a chop but gets thrown up into the arm and kicked in the face. Sauras puts Trent in the corner and tags Jungle Boy, who hits a springboard but gets caught with a back suplex.

Trent puts Jungle Boy in the corner for a superplex but Boy fights him off. Taylor comes in and puts Trent on his shoulders but Boy hits a missile dropkick to knock Trent to the mat. Luchasauras comes in and assists Jungle Boy for a flatliner to Chuck. Sauras goes out of the ring after Chuck but Trent jumps at him and they hit a double-team suplex on the floor. Best Friends hug but Jungle Boy knocks them down with a tope!

We return to see Sauras and Trent make tags, and Jungle Boy gets the better of Chuck with strikes. Trent comes back with a flying knee to Boy, but Luchasauras clocks him with a question-mark kick. Trent hits Sauras with a tornado DDT and everyone is down. Cassidy gets on the ramp and looks ready to attack but out of nowhere comes Ray Fenix with a big kick to take-out Cassidy. Trent gets distracted, along with the referee, and MJF attacks Jungle Boy. Taylor takes advantage and hits a piledriver to JB for the win.

After the match, Wardlow appears and throws Marko Stunt into the barricade like a rag doll. Best Friends check on Cassidy, while Luchasauras helps Stunt to his feet.

We see Jon Moxley arrive backstage and he is in no mood to talk. Last week Brodi Lee stole his title.

This important match gets underway with Ford attacking Statlander, and Baker attacking Shida. Baker immediately tries to kick Shida’s teeth into the bottom rope but Kris saves her and hits Baker with a backbreaker. Her and Shida team-up to attack Ford.

Statlander and Ford fall out of the ring, while Shida counters LockJaw, only to get caught in it a minute later. Again Statlander saves her but Ford hits her with a DDT for a two-count. Baker kicks Ford out of the ring and stomps the face of Statlander. Shida drags Baker from the ring and throws her into the barricade.

Looks like @callmekrisstat and @shidahikaru have found some common ground! Dr. @RealBrittBaker D.M.D. really knows how to bring people together. #AEWDynamite #AEWonTNT pic.twitter.com/1MM5XHasfB

Statlander hits an electric chair drop on Ford but Shida breaks the pinfall. Shida slams Baker into the buckles. Statlander throws both Shida and Baker from the middle rope, then throws Ford onto Baker. Shida drops Statlander with a flying knee and all four women are down.

Back live and Baker stops Statlander from hitting Big Bang Theory, then hits her with a Canadian Destroyer. Shida looks for a falcon arrow but Ford counters and its a Stunner. Baker comes back but gets hit with a powerbomb by Statlander for a near-fall.

Shida suplexes Ford into Statlander. The alien flips over Shida but gets superkicked by Ford. Penelope then hits a springboard dropkick to Shida for a near-fall. Ford then stops to kiss Kip Sabian on the apron but Shida rolls her up for a near-fall. Falcon arrow from Shida but Statlander breaks it up.

Statlander gets Ford on her shoulders but Penelope hits a botched poisonrana – wouldn’t be Statlander if she didn’t screw something up. Shida hits Ford with a gutbuster and a running knee for the win.

Britt Baker had Statlander in the Lockjaw at ringside and didn’t let go. Apparently she hates Statlander now.

As Kenny Omega is making his entrance, Santana and Ortiz attack him on the ramp. They beat him down to the ring and hit a moonsault, before Hardy makes his entrance. Santana meets Hardy on the stage but gets attacked and bitten. Hardy then comes to the ring and beats on Ortiz.

The match finally begins and Santana whips Hardy into the barricade, while Kenny chops Ortiz in the ring. Omega flips over Ortiz and looks for a hip toss but it’s blocked. Ortiz rakes the back of Kenny and poses like a tiger. Santana comes back and they double team Omega but he hits a double bulldog and tags Hardy.

Hardy and Omega hit a double team suplex on Ortiz, then turn their sights to Santana. Hardy hits a leg drop for a two-count, then tags Omega. Santana counters Kenny and knocks him to the outside. Omega drops Ortiz on the outside, then looks to jump into the ring to hit Santana but gets pulled from the apron and whipped into the barricade as we head to the break.

We return to find Santana and Ortiz double-teaming Kenny with a Boston crab/camel clutch combo. Ortiz pokes Kenny in the eye and stands on his chest. Kenny starts to make a comeback but Ortiz pokes him in the eye again and tags Santana.

Omega hits a snap dragon suplex and makes a tag to Hardy, who comes in hot with right hands to Santana. Hardy slams Santana into the buckles over and over, then hits a running lariat. Ortiz runs in but Hardy tosses him right back out, then hits Santana with a side effect. Hardy heads to the middle rope and hits a knee into Santana.

Hardy signals for DELETION but Santana counters the Twist of Fate and sends him to the outside for a suicide dive. Santana and Ortiz look for the Street Sweeper but Hardy hits a neckbreaker and Omega jumps onto Santana on the floor. Omega gets caught with a cutter while Hardy is thrown to the floor. Ortiz hits a shotgun dropkick and Santana follows-up with a flying senton for a near-fall.

Omega avoids the Street Sweeper and tags Hardy. Ortiz looks for a suplex but Hardy catches him with a butterfly submission. Sammy Guevara comes out in a neck brace with a steel chair. Hardy hits him with a huge Twist of Fate, then Kenny hits Ortiz with a V-Trigger. Hardy hits a Twist of Fate from the top rope for the win.