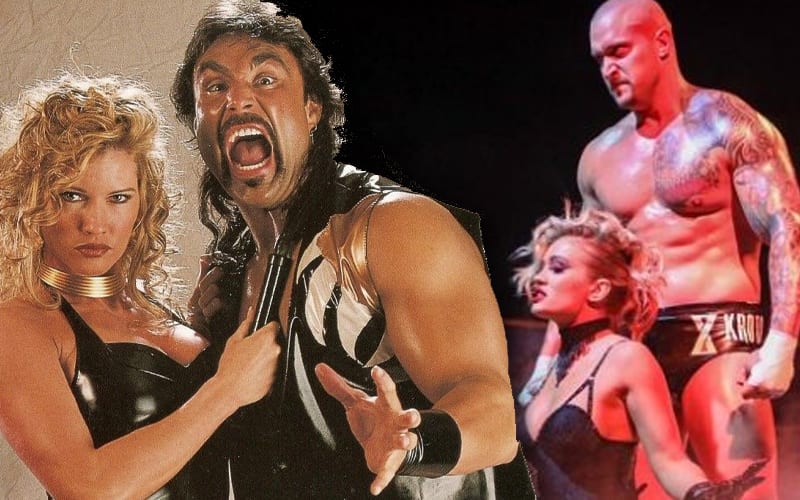 Marc Mero and Sable were a tandem in WWE until Vince McMahon realized that Sable’s name was the one worth so much money. It didn’t take McMahon long to figure out plenty of things to do with Sable, but Mero was eventually cast aside.

Click here for Marc Mero’s crazy story about first finding out that Sable left him for Brock Lesnar.

While speaking on his Jim Cornette Experience podcast, Cornette discussed how he views Karrion Kross and Scarlett. He said that Scarlett is the star just as Sable was. This might see Kross wishing that he could keep up with Scarlett’s stardom just as Mero did with Sable.

Cornette went on to say that Karrion Kross has a lot of potential. WWE didn’t give him the best debut to show what he can do. In the end, Karrion Kross just won his match with the “standard stuff” that everyone does.

“He’s got a lot of potential but why couldn’t he go out and have a Brock Lesnar squash? Turn this guy fucking loose when the bell rings and he mauls this motherfucker in short, quick, decisive, aggressive fashion. Dumps him on his head 18 times, looks dangerous doing it, not even 18 times, three times, looks dangerous doing it, and fucking wins. That explosive kind of dominant performance would have held up the people’s expectations from the entrance.”

“That was standard shit that that everybody else does. Lance Archer’s been doing it on the other channel, fucking every big guy fucking does it. And it’s all blah and they tell them to do it, and it was blah. I would have told him, act like that this guy is in between you and the last scrap of food on Earth as soon as the bell rings, and fucking rough him up as well as beating him.”

Anything is possible, but odds are WWE is going to make a ton of money off both Karrion Kross and Scarlett. They came from Impact Wrestling with a huge drive to prove themselves and that is just what they’re doing.

Click here to watch their incredible WWE NXT debut to see for yourself.

How do you feel about this comparison? Sound off in the comments below!