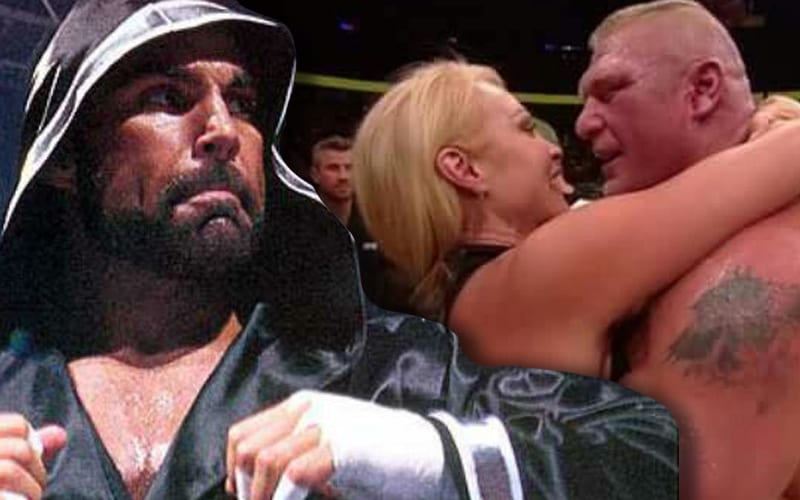 Brock Lesnar and Sable are married in real life. There was a time when everyone had to discover this news even Sable’s then-husband Marc Mero.

While speaking to Hannibal TV, Marc Mero explained how he first realized that the Beast Incarnate moved in on his wife. Mero explained that he would call every night, and he would usually speak to Sable. Then it suddenly became more difficult to reach her.

“I just remember it became harder and harder to get in touch with her. Then there were days when she wouldn’t pick up and it would just go to voicemail. I just kept thinking, ‘Where’s my wife?!’ you know? The wrestling matches are over with, I know they’re driving or in the hotel room. There was no call back, no nothing.”

“I remember leaving a very nasty message, ‘I can’t believe you don’t call us back this is rude’ — I started to feel bad for saying that. I knew her access code to her phone just like she knew mine — we’re a married couple. So I called the phone and I wanted to delete that message.”

“I dialed the number and it said she had two unheard messages. I said okay I have to listen to the first one to get to mine. It was a man’s voice apologizing for the night before. I was like ‘what the heck?!’ It was graphic and I was taken aback. Then I realized that she’s seeing someone else. It was devastating, you know? I thought we were gonna be together forever.”

Marc Mero said he couldn’t eat or sleep, but he did delete his own nasty voicemail. He didn’t say anything to Sable about it until he picked her up at the airport.

“I picked her up at the airport and I said, ‘I wanna know who this is.’ She tried to deny it, but then she said she’ll be moving out and she wants a divorce. It was like my world ended there, man. It was the most devastating, hurtful — I didn’t know what I was going to do.”

Mero said after Sable left him “I got back into drugs, I got back into a horrible life.” Things went south for the housing market as well and he made some “terrible financial decisions.” It got to the point where “I just don’t wanna be here anymore.”

Marc Mero was able to turn things around for his life. He seems much happier now, but there was certainly a rough spot after Brock Lesnar swooped in and took Sable from him.

Marc Mero said that he never spoke to Brock Lesnar about what happened. “I don’t expect a Christmas card from him or anything,” he said with a laugh.