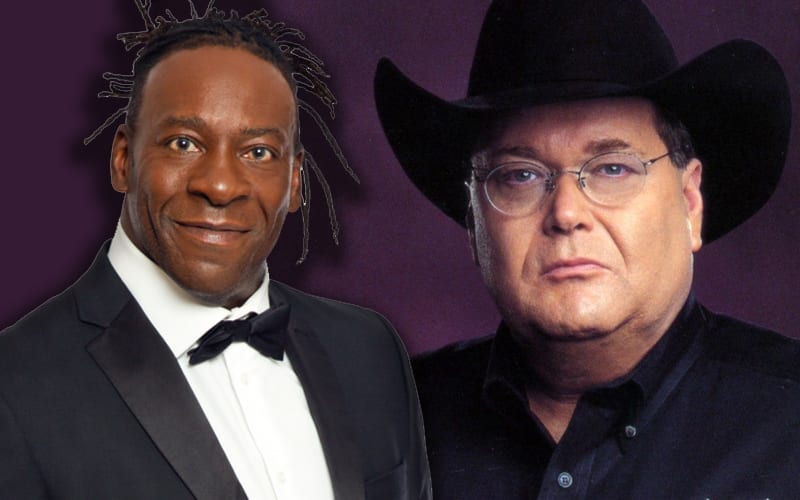 WWE Superstars can make a lot of money, but financial issues can play a part in whether someone is happy. When WWE bought out WCW and signed some of their stars it apparently created some friction.

Jim Ross is now just an announcer for AEW, but he used to wear multiple cowboy hats in WWE. He was not only an announcer, but Ross was also in charge of talent relations. He dealt with wrestlers’ contracts and that can be a tricky issue.

While on his Hall Of Fame radio show, Booker T revealed that Jim Ross had some heat with a few wrestlers coming in from WCW. They weren’t making as much at times and years later he’s discovering this was an issue. On the other hand, Booker T had absolutely zero issue making as much as he was.

“I can’t give JR a whole lot of heat — I head people talking about their downside when they came in from WCW. A lot of guys — I didn’t hear the stories then, but I hear them now because of the age of the internet, you know what I mean? On social media you hear these stories about ‘man, he offered me this much, he offered me this much.’ I remember the downside I got — I was happy as hell.”

Jim Ross told Booker T that “you can make as much as you want to make,” but it wasn’t like WCW. Booker T understood that WWE had a different system of paying their Superstars.

Jim Ross had to hire and fire wrestlers. Booker T said Ross wasn’t in an “envious spot” and he understands how hard it must have been. JR had to fire friends while doing that job.

Others might have developed a little heat with Jim Ross because of how much they were making though.