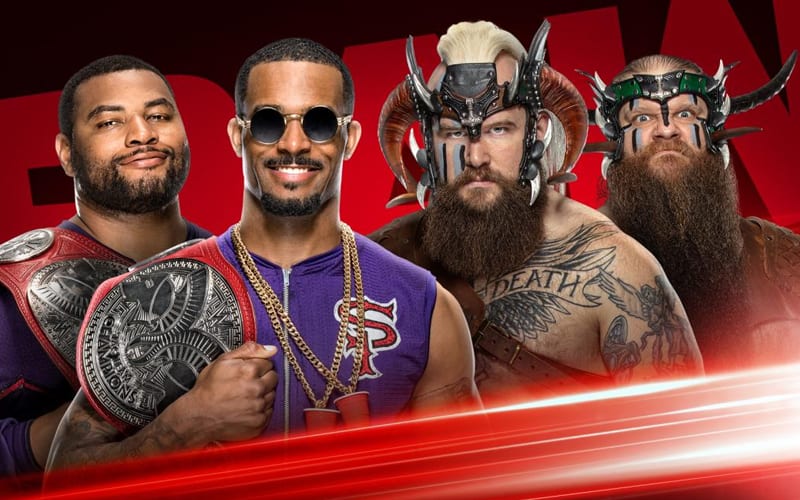 Tonight’s RAW will serve as the go-home before Money In The Bank this Sunday. As such, WWE needs to replace Apollo Crews in the Money In The Bank Ladder Match, seeing as he’s storyline injured. So tonight we’ll be getting a gauntlet match to replace Crews, but we don’t know the participants as of yet.

Elsewhere tonight, the Street Profits will face  The Viking Raiders, Ricochet and Cedric Alexander will battle Shane Thorne and Brendan Vink, and Drew McIntyre will be in action against Murphy. There’s likely to be lots more, including Asuka screaming while Kairi Sane laughs.

This week’s RAW opens with a look back at last week’s contract signing between WWE Champion Drew McIntyre and Seth Rollins.

Always good to see @The305MVP kickin’ it in the #VIPLounge … and he’s about to bring out #WWERaw‘s participants in the Women’s #MITB Ladder Match! pic.twitter.com/CFRMzVRXJ0

MVP is in the ring for another episode of The VIP Lounge. MVP welcomes us to the show and says that last week he had the men competing in this Sunday’s MITB match on the show and it was a disaster. So this week he aims to bring some class and sophistication back to the VIP Lounge with the women competing in the MITB match. He introduces Asuka, followed by Nia Jax and Shayna Baszler.

MVP asks Nia if she has the skillset to get from the ground floor to the roof, then up a ladder. Nia asks if he hasn’t seen her dominate in the last few weeks; she’s relentless and that’s all she needs to dominate. He asks Asuka to respond and she rants in Japanese. MVP asks Shayna how her skills will help her in the match and she says she does her talking with her actions and that’s the biggest difference between her and everyone else. Asuka again yells in Japanese and they stand up to face each other. Both of them turn and kick Jax off her stool and she rolls from the ring. MVP keeps Baszler and Asuka separate and tells them to save it.

Still to come, the Tag Team Champions, and Drew McIntyre in action. But up next is the gauntlet match to determine the final MITB entrant on the men’s side.

Money In The Bank Qualifier

The match gets underway and they lock-up and struggle for control. Lashley drives a knee into Titus but he fires back with right hands. Irish whip and Lashley ducks a clothesline to hit a Spear and get the quick win.

Tozawa slides into the ring and hits Lashley with an enziguiri. He then heads to the top rope and hits a missile dropkick. Tozawa hits the ropes but eats a Spear and he’s done.

Before Benjamin gets in the ring Lashley attacks him on the apron. Shelton fights him off and head up top for a blockbuster. Benjamin sends Lashley over the ropes, then hits him with a switch knee on the apron before knocking him off to the floor. Lashley reverses Benjamin and slams him into the barricade a few times. Lashley gets Benjamin inside and looks for the Spear but Shelton avoids it. Benjamin hits a nice kick but Lashley comes right back with a Spear for the pinfall.

We return to find this match in progress. Carrillo jumps but gets caught and slammed by Lashley. Shoulder tackle from Lashley, then he looks for a Dominator but Carrillo lands on his feet. Humberto hits a missile dropkick, then goes back up top but gets thrown off by Bobby. Lashley clotheslines Humberto in the corner then stomps him. The referee pulls Lashley off and he shoves him, so the ref calls for he bell.

Lashley hammers Carrillo after the DQ, and hits a Spear. Carrillo’s next opponent – a familiar one – saunters down to the ring with a big smile on his face.

Back live and Garza is hounding Humberto in the corner. Garza hits a dropkick to Carrillo’s leg, then rips his own trousers off. Garza snaps Carrillo’s legs apart, then hits a basement dropkick. Garza puts Carrillo in a submission and we get a splitscreen that shows Lana trying to calm Lashley backstage but he storms off.

Humberto fights up and hits a hip toss. Garza catches Carrillo with a rope-assited reverse suplex, then a superkick for a near-fall. Carrillo hits a hurricanrana and an enziguiri. Carillo looks for a moonsault but Garza gets the knees up. Garza grinds Humberto with a submission, then hits a middle-rope moonsault for a near-fall. Garza attempts the Wing Clipper but Carrillo counters with a roll-up and wins.

Garza is out but that’s not the end of Zelina Vega’s chances tonight.

We’re bac and Theory is beating Carrillo, then applies a body lock. Humberto starts to fight out but Theory connects with a dropkick. Carrillo kicks Austin and hits a springboard but Theory punches him in mid-air. Theory takes Carrillo up top and hits a superplex but Carrillo pins him for the win.

Just as Carrillo gets over the challenge of Theory, he sees an ghost come down the ramp.

We’re back and Carrillo is attacking AJ in the corner, stomping him down. AJ knees Humberto a few times until he falls, and gets a two-count. AJ then applies an abdominal stretch to Carrillo but he reaches the ropes. Carrillo punches AJ and swings a kick but AJ catches it and hits a shoulder-breaker. Styles hits a dragon whip, then attacks the leg.

Styles beats Humberto in the corner, then tries another dragon screw but Carrillo counters and hits a DDT. Carrillo hits an enziguiri, then the two go back and forth until Carrillo hits another big enziguiri. Styles kicks Carrillo and looks for a reverse DDT but Carrillo hits an inside cradle for a near-fall. Both men hit stereo lariats and fall. AJ hits a pumphandle gutbuster, then goes to the Calf Crusher and Carrillo taps.

Styles has won the Gauntlet Match, meaning he will be the final entrant in the men’s MITB match this Sunday.  He joins Rey Mysterio, Daniel Bryan, Aleister Black, Otis, and King Corbin. Ironically, Styles just did what The Undertaker did to him in Saudi Arabia; came out at the end of a Gauntlet and won. Styles attacks Carrillo after the bell, slamming his leg into the ring post a few times.

AJ gets on the microphone and says he’s not a zombie, or a ghost. He’s the Phenomenal AJ Styles and there is no Undertaker here to steal his spotlight. He knows he got buried but he didn’t lose. There were no rules in the Boneyard Match, so he didn’t lose. But he ceased an opportunity and now he’s in the most unique Money In The Bank match of all time and it’s worth it. In fact, he will do anything to win it. And if that means throwing someone off of Titan Towers, then so be it (first he said he’d kill The Undertaker, and now this?). AJ says he will finally make Mr. Money In The Bank phenomenal.

“Mr. #MITB can be PHENOMENAL.”@AJStylesOrg has plans to leave @WWE HQ with the contract THIS SUNDAY! #WWERaw pic.twitter.com/I245XD1qzA