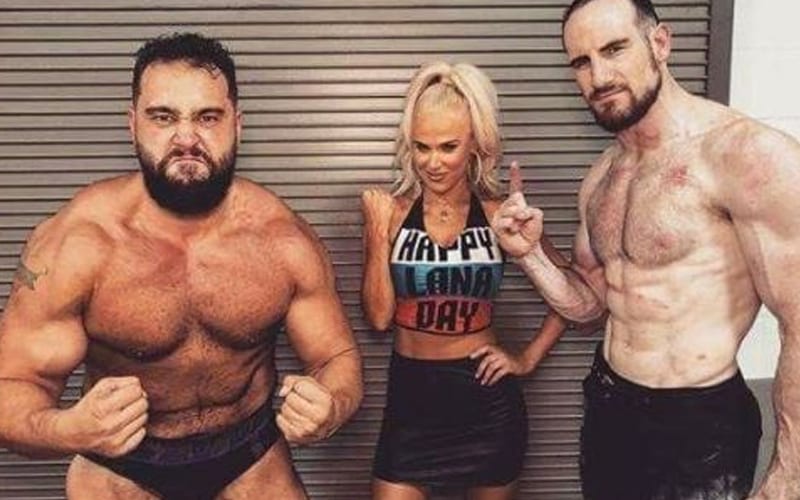 WWE will sometimes break up an act without any plans for one member of the group. That is what seems to have happened to Aiden English, but he obviously didn’t want it that way.

Rusev Day started organically, but WWE likes to determine who gets over. They obviously didn’t intend on Rusev and English’s heel act becoming so popular. Eventually the company decided it was time to split them up while they were still selling tons of Rusev Day t-shirts.

While speaking to Inside The Ropes, Aiden English discussed WWE’s decision to split him up from Rusev. WWE moved Lana into the picture, and they tried to make it work as a trio. Despite them pitching to change creative’s mind about things the decision was still made to carry on with splitting up the act.

“So it was starting to come from Creative, just about looking for ways to try and get away from [it]. One, Lana had come back into the picture; I mean, she’d come back on SmackDown or whatever it was. So they were trying to find ways to incorporate her. And so like, that’s such an obvious thing creatively. ‘Oh, introduce someone else and it causes friction.’ And so it’s funny, when she first came in I think everyone was like, ‘Alright, well here is where we’re going to start building to it.’ So I was kind of like, ‘Alright.’ I knew this would happen at some point, I mean we were all hoping it would last longer. But then it’s funny — so it was pretty much where I’m like, ‘Alright, two or three weeks time, goodbye,’ but then they kind of kept it and that Mixed Match Challenge stuff kind of happened and we kind of got to do things together. Even me and Lana got to do things together. And so I was like, ‘Alright, I’ll bite. Maybe the three of us can make the family bigger,’ so to speak, right?”

“So we did that, but then eventually, sometimes they just want to go in different directions so bad. We argued and kind of pitched our point, we wanted to really kind of keep it running as long as we could. But at the end of the day the powers that be are the powers that be, and they saw different things for Rusev and different things for me, so time to go in that direction. It is not the way I would have had us split, but sometimes you just – you make your fight, you make your argument, you make your pitch. But at the end of the day you do what you’re told.”

Aiden English and Rusev were both released on April 15th. You never know if they might get the act back together eventually. Since Lana is still with WWE it’s highly unlikely that she will involve herself with their plans anymore.

What did you think about WWE splitting up Rusev Day? Was it too soon? Sound off in the comments below!