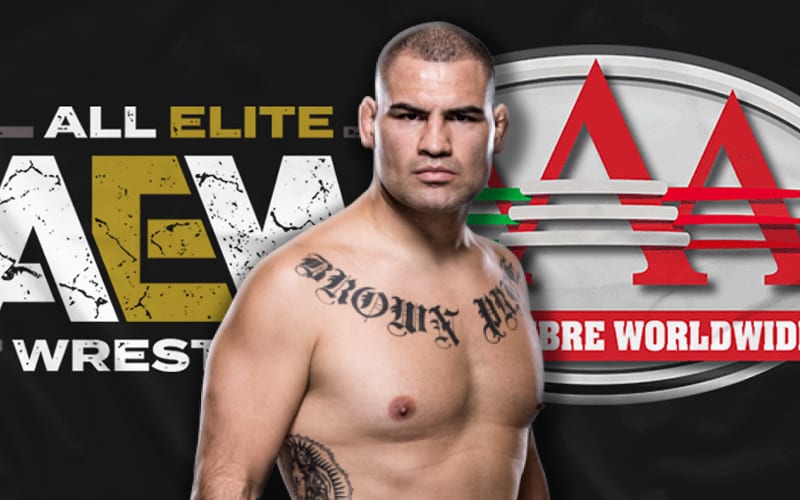 WWE let Cain Velasquez go from his contract in a rather surprising move. The company had a couple of reasons for making this decision. Velasquez was costing the company a lot of money and they weren’t using him at all.

During Wrestling Observer Radio, Dave Meltzer discussed Velasquez’s next options. He could have interest elsewhere, but it will obviously have to wait until the COVID-19 pandemic subsides.

The real question is whether Cain Velasquez would make a return to UFC. That possibility seems a bit more unlikely.

“I don’t know if he would go back to fight at this stage of the game. I could see him wrestling for AAA, perhaps with AEW, but it’s harder.”

“It’s funny because if he would have signed with AEW they probably would have used him a lot more because those guys were really impressed with his debut. In WWE, if you remember the match in Saudi Arabia he didn’t do anything in that match. That match was essentially one takedown, one submission and that’s it. They didn’t try to have him do anything. So, that’s the deal.”

“I could definitely see AAA using him. AAA wanted to use him after he signed with WWE. There were at least thoughts of him trying to work with WWE and bringing him in for [AAA] shows, obviously the odds of that happening were very, very slim, but I know AAA had ideas like that.”

It was noted that right now Cain Velasquez won’t be working anywhere right now. The COVID-19 pandemic shut down a vast majority of pro wrestling events.

“I could see him working a TripleMania or something like that,” Meltzer remarked when discussing how AAA might bring him in for a big show down the line. It is unclear if AEW would be interested because their business hit an unexpected downturn after the elimination of live fans.

Where do you think Cain Velasquez will go next? Does he have enough money to never work again? Sound off in the comments below!