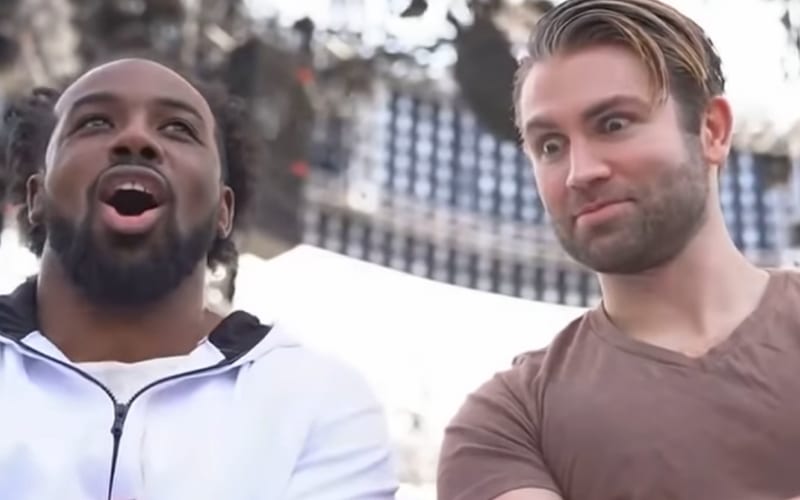 Xavier Woods, Tyler Breeze and Audrey Marie were a faction in FCW known as the Hollywood Express. The stable didn’t go very far, but Woods explained while Breeze was on New Day: Feel The Power that they tried.

Someone high up in WWE apparently addressed the FCW locker room and gave them a big speech about pitching ideas. Woods didn’t reveal who their higher up visitor was. Xavier and Breeze did drop “a house payment” on gear and promotional material for a gimmick they never heard back about.

“When you were Mike Dalton and I was still Xavier Woods and we tried to become a team because someone very influential came down to developmental and said ‘if you have an idea that you think is good, that you think is worth it, that you think we’re not listing to you give all that you have to make sure that everyone hears you. You shout it from the mountaintops and you are the owners of your own destiny and if you get released or whatever it’s on you because you didn’t work hard enough!'”

“So we went okay let’s put a house payment on this tag team gear that we drew up, let’s get 8x10s made — we had a whole folder with all three members of Hollywood Express. We made DVDs cutting promos on every single tag team in the company and handed it out to what? 20 or 30 people — everyone who was out there in NXT. To this day, to this day I haven’t heard a word about it. Stuff like that brought Breeze and I together because we kinda just wanted to do well and we saw each other getting treated like that, I guess.”

Tyler Breeze and Xavier Woods were never given the green light to have their own tag team in WWE. It makes you wonder how things would have been different if WWE loved the idea of the Hollywood Express.

What do you think about the Hollywood Express? Sound off in the comments below after checking out a promo they spent so much money on.