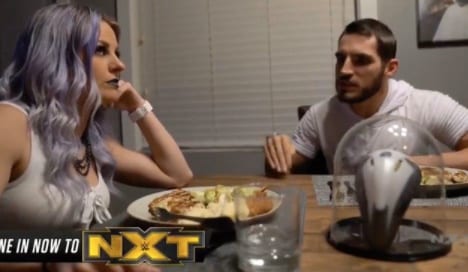 Last night on NXT, Johnny Gargano and Candice LeRae had a great segment together that pretty much confirmed their new ‘dark side’ alignment as characters on the brand.

It was a pretty intriguing snippet, to say the least, and we can expect a whole lot more from them as the weeks go on.

However, some NXT stars on social media decided to take a different approach when reacting to their new personas.

Dijakovic is one of the fastest rising stars in all of WWE right now, and it’s going to be interesting to see what kind of direction they go in with him over the next few months – if they’re still allowed to put on shows by that point.

This hilarious jab certainly grabbed the attention of NXT fans, and perhaps signalled that he’s going to be thrust into more important storylines and feuds sooner rather than later.