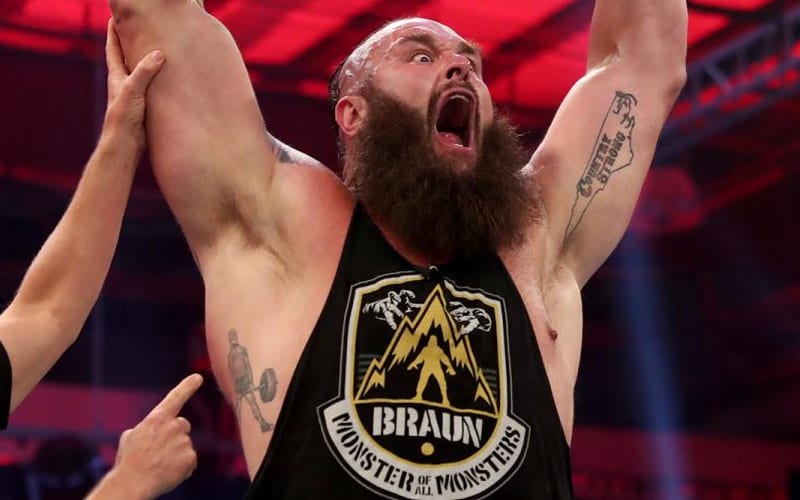 Braun Strowman is the latest in a long line of big men in WWE who received a monster push, no pun intended. He is now WWE Universal Champion after defeating Goldberg at WrestleMania. Strowman didn’t do it all by himself.

While speaking with WWE The Bump, Braun Strowman said he wouldn’t be in WWE without Mark Henry. Strowman credited Henry and other big men for taking him under their wing.

The Monster Among Men went on to explain that big men in WWE need to stick together. There aren’t very many monster sports entertainers in a world dominated by such athleticism.

“Mark reached out to me last night, too and stuff and you know I couldn’t thank him enough because you know at the end of the day without Mark Henry there is no Braun Strowman. Mark found me. Mark put his name on the line to get my name in front of the powers-that-be and he’s been there for me every step of the way when I needed anything when I was doubting myself when I thought that I wasn’t going to make it when I wasn’t doing anything right I could talk to Mark and he’s a father figure to me. So many of the legends and soon-to-be and Hall Of Famers that I’ve had the opportunity to be around, share the ring with, same thing with Undertaker and Kane and Big Show — those guys took me under their wing because at the end of the day we’re a dying breed. There aren’t monsters anymore and stuff like that. There’s only a few of us left that can do this with how unbelievably advanced our sport has become with everything.”

Braun Strowman said that WWE has the most talented roster in the company’s history. Now he is Universal Champion and a Monster Among Men on the SmackDown brand.