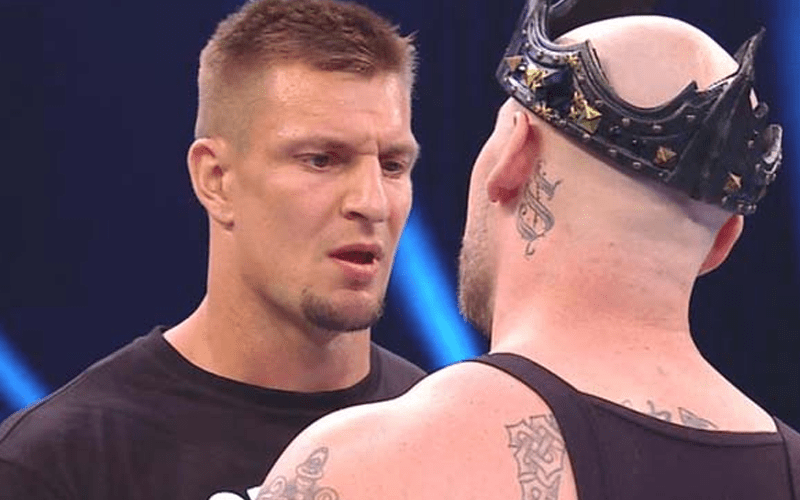 Rob Gronkowski has quite a personality. If you didn’t know who Gronk was before his WWE debut, it was evident by the way he danced to the ring that he has charisma to spare. Gronk signed a deal with WWE and his WrestleMania role could get physical.

While speaking to Newshub, Rob Gronkowski talked about how his previous NFL experience helped prepare him for WWE Superstardom. While with the New England Patriots, Gronk won three Super Bowl rings. This experience in clutch situations and the ability to focus and train with intensity could create the recipe for a successful run with WWE.

“Playing football in the NFL and being around the best of the best has definitely prepared me for WrestleMania. You can’t just walk out on the field and expect to be ready to compete – you have to practice, work out and know your plays.

It’s the same thing for WrestleMania. I can’t expect to go out there, and jump off the top rope or cut a promo. Everything is about practice and that’s what I’ve taken from my time in the NFL. If you want to be great in any industry, you have to do the work and prepare. In the time I have been with WWE, I can see the superstars are the same way and they want it just as bad.”

Rob Gronkowski is good friends with WWE Superstar Mojo Rawley. That is why Mojo was quietly moved over to SmackDown recently. We’ll have to see how often Rob Gronkowski shows up on WWE television, hopefully, he will get to experience some WWE history in front of a live crowd soon.