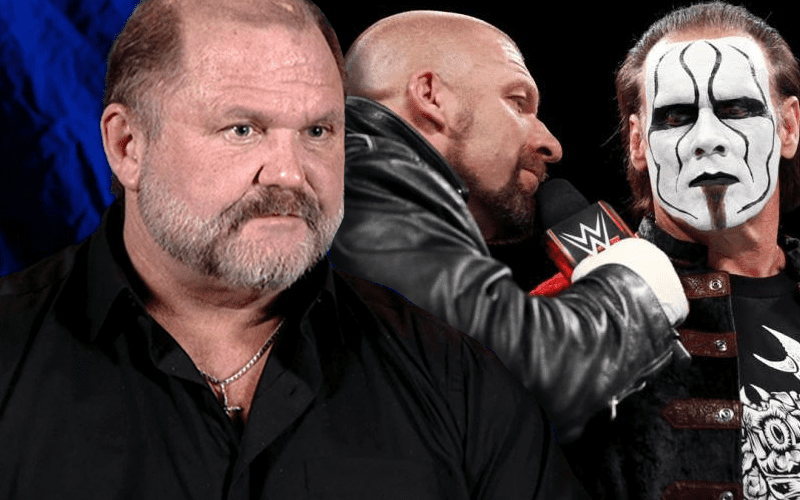 Sting retired under the WWE banner as a Hall Of Famer. He only had a select number of matches with the company. He didn’t receive the hero’s treatment a lot of fans hoped for.

During the ARN Podcast, Arn Anderson unloaded a bit about how WWE treated the Stinger. It didn’t just stop in the ring as WWE would also bury him on commentary to give him less of a chance.

“To just bury him on the commentary – if you go back and watch it and listen to it, they just buried him. As it turned out, they prostituted each other’s finishes which I’m not a fan of because guys don’t have finishes anymore…”

After Triple H vs Sting was over at WrestleMania, Sting shook Triple H’s hand in a babyface display. Arn Anderson didn’t appreciate this aspect of the match at all.

Double A said it’s just another instance of “WWE just beating you over the head” with the fact that pro wrestling is a work.

“After all that bullsh*t…I’m gonna shake your hand and walk out. It’s another one of those deals of the WWE just beating you over the head with ‘this is a work, guys this is just entertainment, it don’t mean sh*t and the match is over now, we’ll go back to just being entertainers.’ I don’t think the audience needs that, I don’t think they want it.”

Vince McMahon defeated WCW in the Monday Night Wars. He might not have made that message as clear as he would have liked. After defeating Sting in the way they did it seemed to put the “last nail” in that proverbial coffin.

“The reality is this, it was the last nail that Vince could nail into the coffin and say ‘okay, it’s done, we’re the superior company, they said they were gonna put us out of business, they led for all those weeks but in the end, here’s your last remaining guy and he was your biggest star and we just crushed him before your very eyes at the biggest event of the year. It is now officially done.’ It’s like WCW never existed, that is what would have been going through [Vince’s] mind…”

There were rumblings that WWE and Sting might be close to working something out. He did not appear at the Royal Rumble or Saudi Arabia. We’ll have to see if WWE and Sting come back around to figuring out a deal. Until then Sting’s best matches will remain outside of WWE.