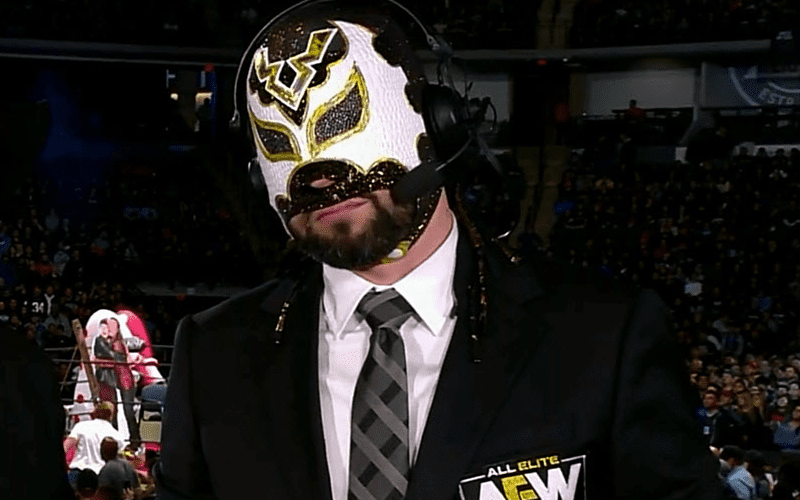 AEW fans are familiar with the company’s masked announcer Excalibur. Some newer fans might like to know why their commentator wears a mask.

While speaking to Chris Van Vliet, Excalibur explained the origin of his mask. He used to wrestle and comes from the lucha libre tradition as he is from “north of Mexico.”

The mask is a part of a culture that Excalibur always admired. So, when he made the jump over to the commentary desk his mask came with him.

“Well, it may shock people to learn that I used to wrestle professionally. I started in Southern California, where there is a big lucha libre tradition, you know, just being north of Mexico. Lucha libre being the Mexican style of professional wrestling. And masks are prevalent not only in lucha libre, but all facets of Mexican culture.”

“It’s part of their cultural mythology basically, and so I took a shine to lucha for two reasons. One, I was a big comic book fan, so there was the superhero-esque aspect of it. And two, I just liked the athleticism of lucha and that style of wrestling more than what was happening in like the mid-90s in WWF or WCW at the time. And so that led me down a road where I discovered the Japanese version of lucha, where all these wrestlers would come over from Japan, they were usually junior heavyweight style wrestlers.”

“They would come over from Japan, train in Mexico, and then go back to Japan, and they started their own promotion called Universal Pro Wrestling. Grand Hamada was the one who started it. And that promotion had the very early incarnations of The Great Sasuke, Super Delfin, Taka Michinoku, Gedo, Jado, Ultimo Dragon, all these guys who would go on to become some of the greatest junior heavyweights.”

Excalibur will likely be around AEW for a long time. His voice has already called several great matches and many more are to come. Since All Elite Wrestling signed a new WarnerMedia extension fans probably need to get used to the masked man wearing a headset.