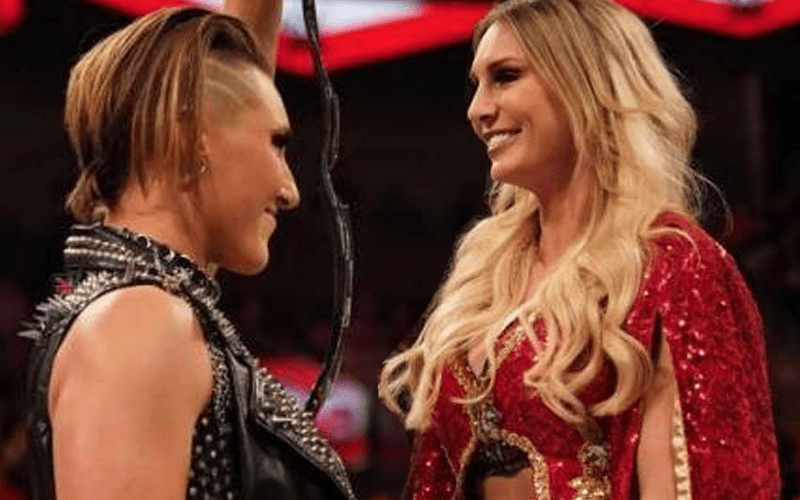 Charlotte Flair showed up at NXT TakeOver: Portland and she made a big statement. After The Queen took out Rhea Ripley, she accepted her WrestleMania challenge. Now Flair vs Ripley will happen in Tampa for the NXT Women’s Title.

During the post-TakeOver conference call, Triple H was asked who came up with the NXT Women’s Title match at WrestleMania. He said it wasn’t a USA Network call at all to involve NXT into the RAW storyline.

The Game said that he was shocked upon first hearing this idea as well. He had to give the credit to his father-in-law Vince McMahon for first saying that Flair vs Ripley is the Mania match-up.

As you build forward on these things, you have opportunities where you look in a moment of time, and you go, does Charlotte go after [SmackDown Women’s Champion] Bayley and Sasha Banks on that side? Does she move into that realm? Does she come after [RAW Women’s Champion] Becky Lynch? All the things that you have sort of seen before, and you’re looking to get fresh, and build and new. And I think you see that with Shayna Baszler going after Becky Lynch, and you see that in different ways on SmackDown with where they’re going so this was a way of Charlotte Flair needing to be in that big epic role. I think it really had nothing more to do with that.”

“I think people put too much stock into building up other things. It’s easy to put your tinfoil hat on and start to talk about stuff, and I’m sure just even saying that, everybody will be like, ‘Oh my God, there’s no way they didn’t…’ Whatever, you believe what you want. It really comes down to that, this is good storytelling and that’s what the goal is here, it’s just really good storytelling across the board.”

WrestleMania could have a very interesting result. If Charlotte Flair is able to beat Rhea Ripley then that means The Queen will return to her kingdom of NXT. Adding Charlotte Flair back into the mix at NXT could really shake up a lot of things in the black and gold brand.