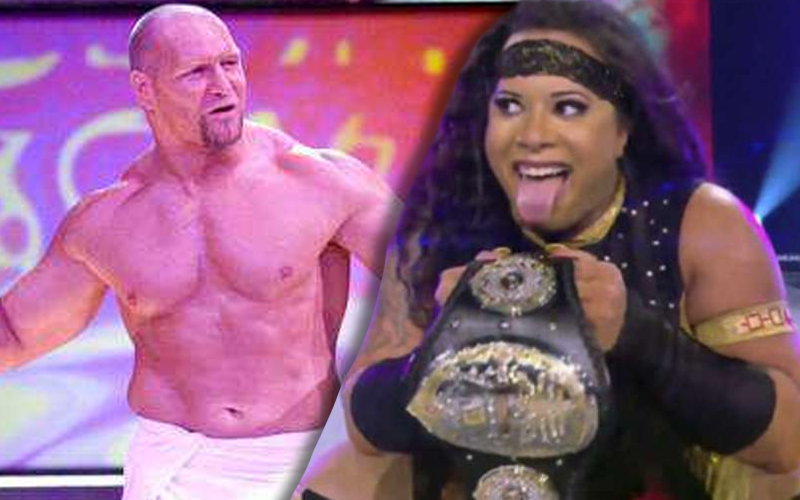 Val Venis doesn’t wrestle anymore. He runs a marijuana dispensary now. He was watching AEW Dynamite this week and he had a lot to say about Nyla Rose’s big win.

Some people came forward with transphobic comments after Nyla Rose won the AEW Women’s World Title. She has a way with dealing with haters.

Val Venis unloaded on Facebook which you can see below:

#WWE drops “Womens” from the WOMENS TITLE!#IMPACT makes a Women the World Heavyweight Champion#AEW makes a man the WOMENS CHAMPION!

WHO THE F*CK ARE THESE INSANE SOCIAL JUSTICE WARRIORS WITH PENCILS AND PAPERS RUINING THE INDUSTRY I LOVED SO MUCH?

It should be noted that Triple H squashed the rumor about NXT dropping gender specific names from their titles.

Val Venis also tweeted out a meme quoting himself saying: “Today I identify as a Great Dane. Gonna enter the Westminster dog show and win the XL Dog title.”

He fired off two more tweets where he said:

The Big Valbowski is all pro women.

When I turn on the mind numbing boob-tube to watch two women wrestle for the championship, I expect to see REAL WOMEN wrestling.

The Soy Boy Social Justice Warriors and anti-women morons who have taken over the writers duties in pro wrestling have forced The Big Valbowski to adjust his catch phrase to better reflect reality.

Eric Sims later posted on Facebook with an update on the Big Valbowski. He is “pro Nyla,” but he isn’t a fan of AEW’s writing at all. Val Venis is also not shy about voicing his opinions.

Just spoke to Sean Morley Val Venis about his comments on Nyla Rose. He is pro nyla but anti writing on with aew. He has some strong opinions based on facts. I suggested getting in the ring and challenging Nyla Rose to a match and he agreed to do it. Now we need a promotion to do it with. I think my friends at Titan Championship wrestling would have the perfect platform for him / them to have a match.