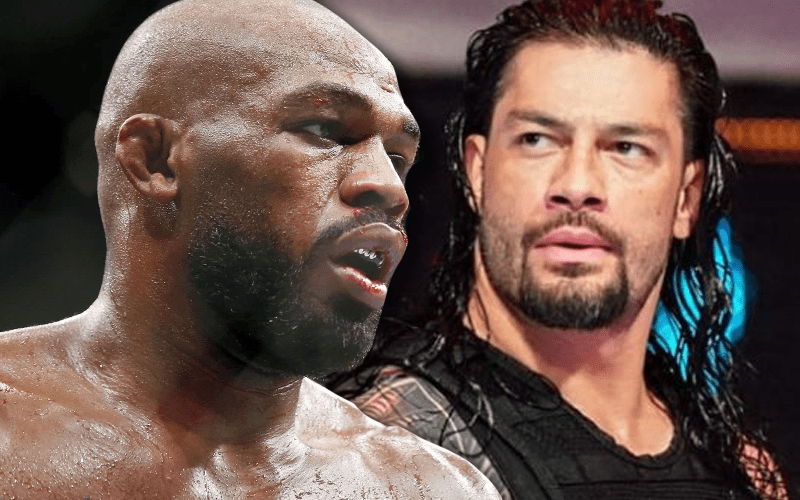 Jon Jones recently stated that it’s inevitable that he ends up in WWE. He said that the MMA world and pro wrestling world are so alike. He also has a lot of respect for the pro wrestling business.

Roman Reigns has been doing some press for WrestleMania. He was asked about squaring up with Jon Jones in the squared circle. The Big Dog didn’t seem too concerned about his chances against the UFC Light Heavyweight Champion as he spoke to TMZ. Jon Jones needs to focus on his current career first.

“He’s definitely got tools. There’s no doubt he’s a bad man, but obviously what we do is a little bit different than the Octagon and it’s gonna be a different travel schedule and different demands. I definitely think he’s got a great name and a great work ethic and he’s got a huge career that’s still going in MMA.”

“I would say keep your eye on the ball now, Jon. Don’t worry about WWE. I definitely think there could be a future for him if he could put in the time and transition and develop the skills that we use.”

When it comes to whether Roman Reigns would be interested in facing Jon Jones, he replied:

“Oh yeah for sure. Someone like Jon Jones if you’re gonna step in a WWE ring you most likely wanna be in there with the Big Dog.”

“It would be a hell of a figh. But when it comes to the squared circle, I don’t think there’s anybody better in the world [than me]. So, yeah, I feel VERY comfortable being in the ring with Jon Jones.”

Jon Jones could be a big-money name for WWE. He might also be a big cross-over star if he’s willing to become a WWE Superstar. Right now he’s still very active in the UFC, but Roman Reigns seems welcoming for a new challenge down the road.