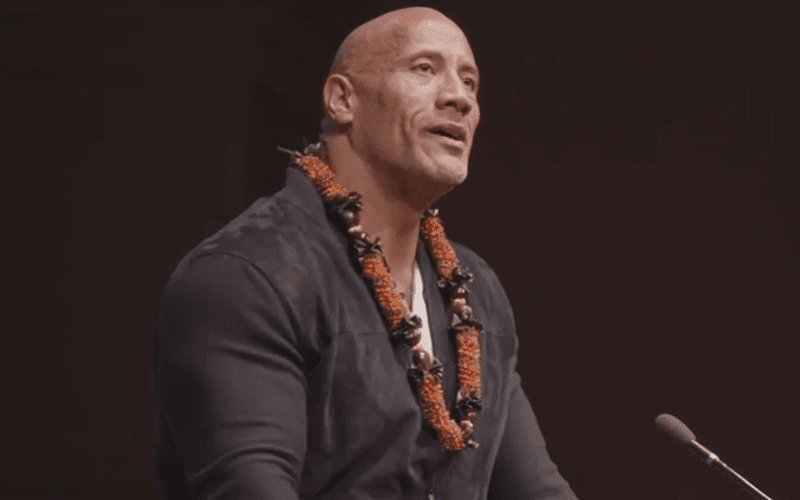 Rocky Johnson passed away and the world mourned for him, especially his son Dwayne.

The Rock recently uploaded a video of the eulogy that he gave at his father’s wedding. It was a touching speech where he thanked his late father for teaching him so much. It really was quite an emotional speech and a fitting tribute to his legendary father.

“I was on my way to work, the other day on Jan. 15 and I was just pulling into work and we were shooting that day and it was the very first day of production […] something’s going on with your dad.”

“Lauren was with our babies, she was with my mom and she said, ‘You know, I really can’t talk… I think you should call Cora though’, so of course I called Cora.”

“I’m literally just pulling in and I’m looking at the whole crew, hundreds of guys and women milling around, carrying equipment and waving at me in the truck, and I’m waving back and it all got really foggy and it seemed like it was a big dream.”

“You know how you have those moments where you try and shake yourself out of it, and you’re like ‘No, it’s not a dream. … My dad’s gone.’”

“The other side to it that I wanted to point out that I thought was important to say is that when somebody is a trailblazer that means that they actually, they have the ability to change behavior and audience’s behavior, people’s behavior […] And for my dad, when he broke into the business in the mid ’60s and throughout the late ’60s and into the ’70s in the United States where racial tension and divide was very strong and in the ’60s and the ’70s you have a black man coming in, it’s an all-white audience and all these small little towns that eventually I would go on to wrestle in — but at that time he changed the audience’s behavior and actually had them cheer for this black man.”

“When you think of my dad’s name, you think ‘hard work.”

“You think ‘barrier-breaking,’ you think being the hardest worker in the room, always working out. He taught me how to work out at a very young age […] Hard work, discipline — those are things and tenants that are synonymous with my dad’s name.”

“I wish your soul at rest and at ease.”

The world will never forget Rocky Johnson for his contributions to not only the wrestling world, but pop culture as a whole. RIP.

Thanks to People for the quote