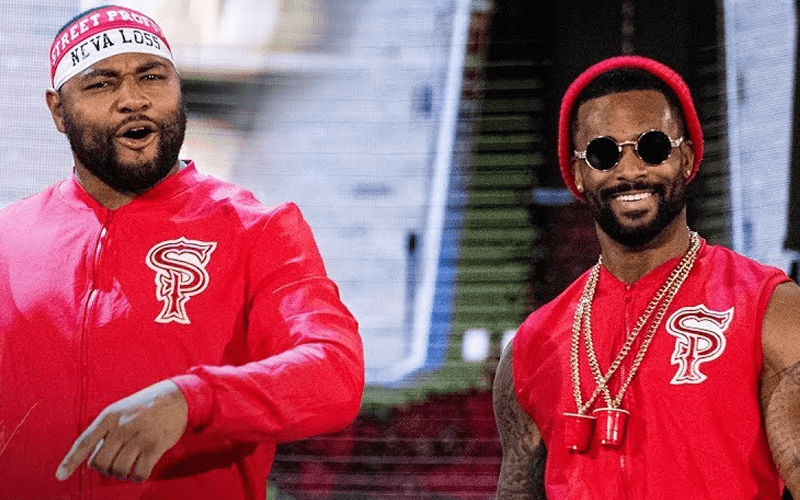 Angelo Dawkins entered the the WWE Performance Center in 2012. He didn’t even have ring gear at the time which is something that cause Corey Graves to rip on him and Bryon Saxton gave him a 30-minute lecture about it.

While speaking to WWE The Bump, Dawkins discussed the Street Profits’ rise in WWE so far.

“I guess if we didn’t expect to see this success we wouldn’t be here right now. It’s been a fun ride. A bit unexpected, but expected all at once.”

Montez Ford went on to elaborate on how special the Street Profits’ rise in WWE has been so far. Not only did they achieve great popularity in such a short amount of time, but Ford got to do it with Angelo Dawkins.

“Especially like we’ve been knowing each other. When I first got to the PC he was the first person who like linked up with. So, for us to have that journey of not only going to the PC, but going to RAW, and going to the Draft and seeing all this stuff happen. It’s like you’re doing it with your brother. It’s cool, the whole journey joining the PC and getting the RAW and also he was my best man at my wedding.”

“So, for everything to accumulate and reach that point it’s just the whole blessing, man.”

We’ll have to see what’s next for the Street Profits in WWE. Montez Ford discussed how being a Marine helped him prepare for the pressures that WWE can offer. It seems like Dawkins and Ford are ready for any challenge ahead of them.