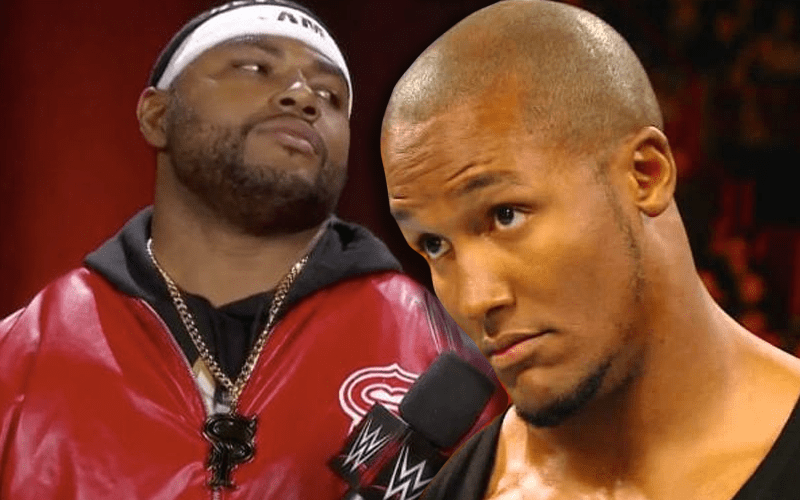 Angelo Dawkins was part of the class of 2012 for the WWE Performance Center. He didn’t come prepared.

During The Street Profits’ appearance on WWE The Bump, Angelo Dawkins revealed that he didn’t have any ring gear when arriving at the WWE Performance Center. He wore basketball shorts, but that turned out to be a decision that opened the floodgates for a lot of comments.

He noted that Corey Graves ribbed him especially hard about his basketball shorts. Bryon Saxton also pulled him aside to give him a 30 minute soft-spoken lecture about ring gear.

“So they were like, ‘Hey you gotta go over and take these pictures really quick.’ I didn’t have any tights. All my singlets were back at home in Cincinnati anyway so I just left them all there. I didn’t think I would really need them.’

“I was like, ‘I’ll be alright fam, whatever.’ I remember taking the pictures and everyone looking at me crazy like that was not a smart move. I remember one show Byron Saxton came up to me and gave me a 30 minute lecture. Oh, it was the nicest way ever, trust me. Trust me I’ve had a lot of lectures and my ears are still ringing from those lectures. Byron Saxton, I heard him loud and clear, but he was speaking in such a nice a subtle voice. He had his bullet points. I think he had a big PowerPoint planned of what he was gonna say to me, but he was like, ‘Dawkins man, what are you doing man?'”

Kayla Braxton quickly brought up how funny it is that Angelo Dawkins still rocks basketball shorts as a part of his gear today. Nobody is teasing Dawkins about his ring gear now, but that wasn’t always the case.