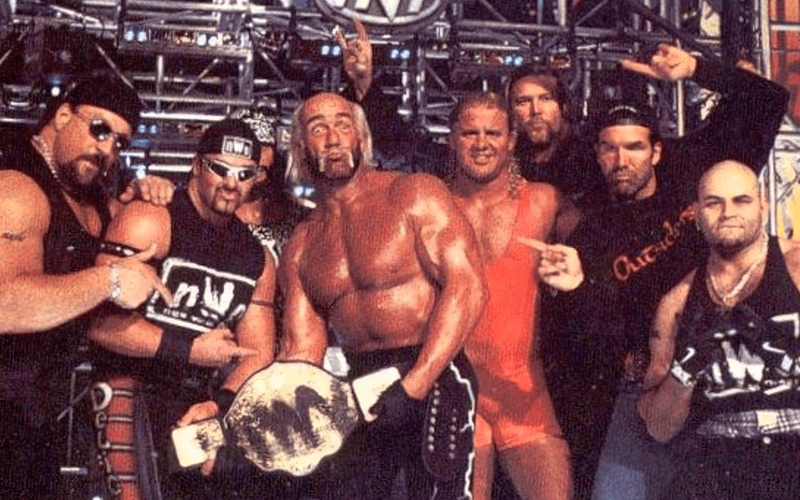 The nWo are about to get quite a focus at the 2020 WWE Hall Of Fame. Hulk Hogan, Scott Hall, Kevin Nash, and Sean Waltman will all get their 2nd WWE Hall Of Fame rings, but there were a lot more members than just those four.

During a recent episode of Talk Is Jericho, Eric Bischoff explained the original plan for the nWo. He wanted them to take over Nitro. This is why he added so many members because he needed a roster deep enough to literally fill up an entire weekly show with nWo angles.

“The reason for that, good idea, bad idea, doesn’t matter at this point, but the reason for it was because the idea originally was to create this hostile takeover, this war between the nWo and WCW, and I wanted nWo to takeover the Nitro show, and I wanted WCW to have their own show on Thunder.”

“So in order for nWo to have their own show, and have their own roster to deep enough to sustain a two, or at some point a three hour show, there had to be more nWo members and eventually peel off and turn on the original nWo and all that kind of storyline gaga. But I was building up the nWo roster so I could eventually have WCW on Thunder, nWo on Nitro and have my two companies so to speak battling each other. Good idea, bad idea, doesn’t matter at this point, but that was the idea.”

The nWo didn’t take over enough to get their own show, but it was certainly close on some week. It also makes you have to wonder what kind of WCW that Eric Bischoff would have operated if he would have been able to acquire the company when they were negotiating a buy-out.