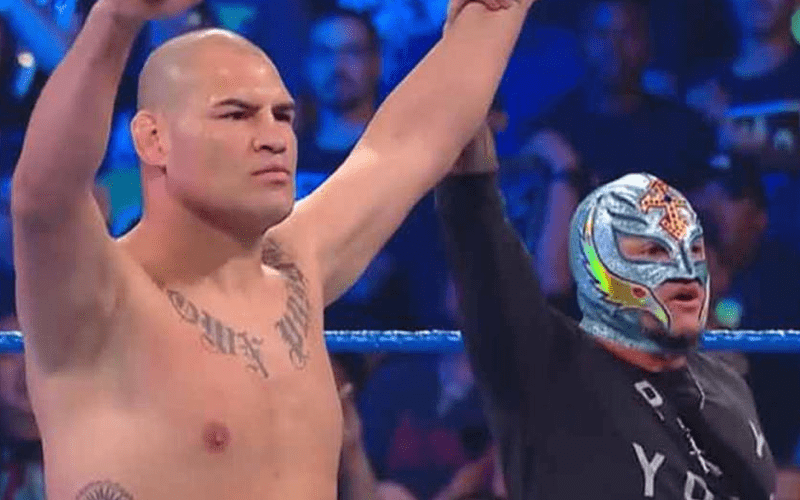 Cain Velasquez was scheduled to be at the Royal Rumble, but then he wasn’t used. He wasn’t even there from all reports we heard. The former two-time UFC Heavyweight Champion is still with Vince McMahon’s company so they’ll use him. We’re just waiting to see what’s next.

While speaking to Wrestling Inc, Rey Mysterio revealed that Cain Velasquez has a lot to show in the ring. He said that the world will be shocked when they finally see Velasquez in WWE full-time.

“We had a couple of opportunities to train down in San Diego where my son trains as well, and he loved it. He’s another guy that I think is gonna shock the world when he takes this on full time.”

“I know he’s been away right now for a minute, but once he sets foot back in that ring, he loves that lucha libre style, and he’s very agile for his size.”

“I think he’s gonna be a great one in the ring. I can’t wait to see that full transition. Right now, we’re just kind of seeing teasers, but once he sets his mind and he wants to do something, he doesn’t stop until he accomplishes it.”

We’ll have to see what Cain Velasquez’s version of “full-time” is. For most former UFC Champions coming over to WWE full-time doesn’t have the same definition as other Superstars.

Cain Velasquez also has some knee issues. He was considering stem cell therapy so he could avoid surgery. The fact that he wasn’t used in the Royal Rumble means he currently doesn’t have a spot on WrestleMania either.