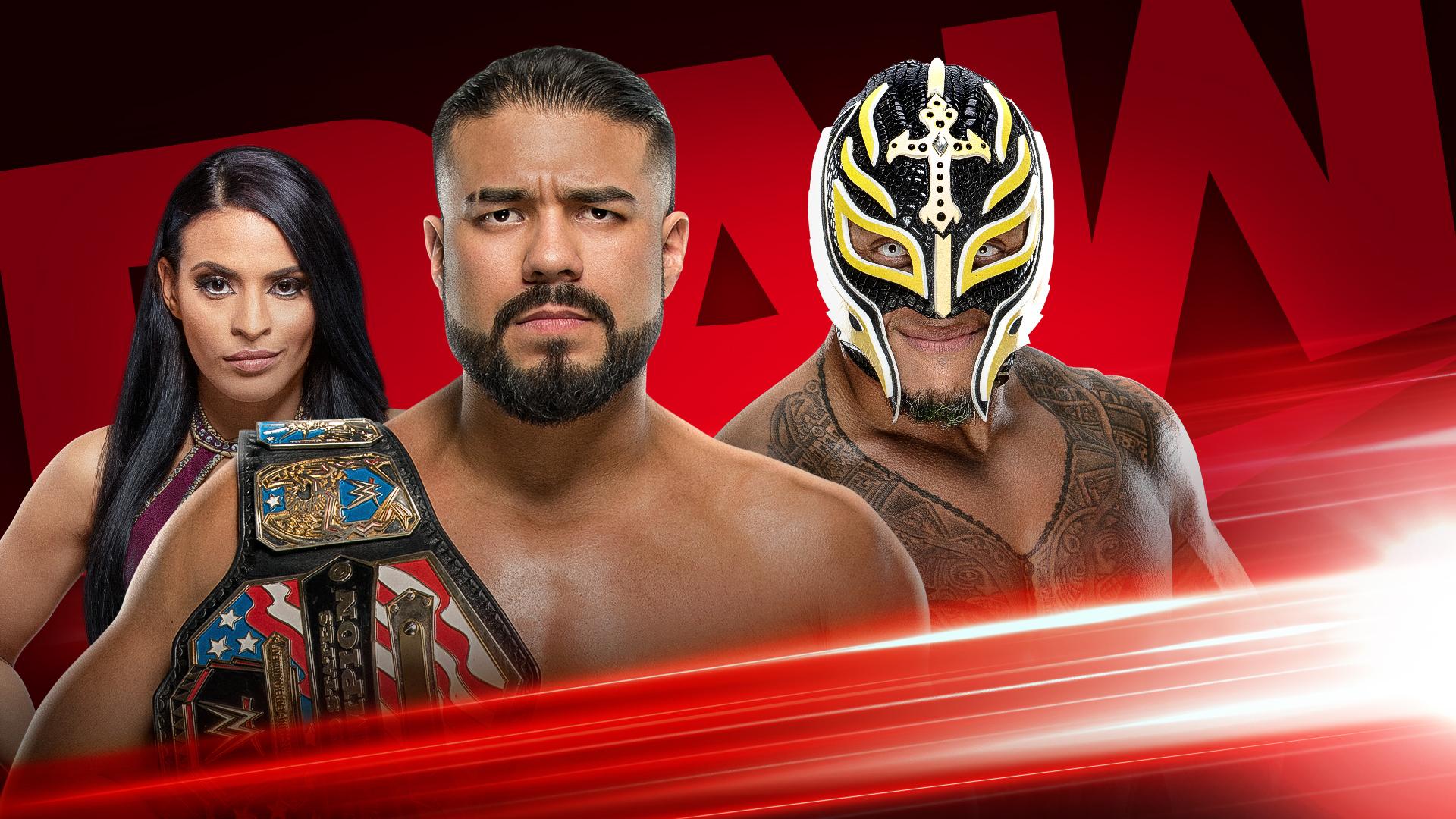 Welcome to Ringside News’ results for WWE Raw, one week away from the 2020 Royal Rumble.

With the Rumble less than a week away, the WWE Champion, Brock Lesnar, will be in the house. Last week Brock came out and had one of the best segments he’s had in some time, entirely thanks to R-Truth’s hilarity. It’s unlikely such is the case tonight, and I wouldn’t be surprised to see someone interrupt Brock and throw him over the ropes.

The two big matches confirmed for tonight see Andrade face Rey Mysterio in a ladder match for the United States Championship, and Rusev team with Liv Morgan to face Bobby Lashley and Lana. And those are the only known matches and segments ahead of tonight, though we can expect more drama from Seth Rollins, AOP, Buddy Murphy, Samoa Joe, and Kevin Owens, as well as Becky Lynch/Asuka, and Orton/Styles/McIntyre.

Things are bound to be 🔥🔥🔥🔥🔥 on the FINAL #RAW before #RoyalRumble!

Seth, Buddy, and AOP are in the ring, and Seth has a new stained-glass style shirt. Rollins says he wants us to know that we’ve all played a part in making him who he is today. He thanks us all for believing in him and for our support. However there is someone he needs to thank specifically.

Rollins puts his arm around Buddy Murphy and says he opened his eyes last week. He says Murphy was courageous and brave enough to help them, and now he stands on the right side of history. We see a replay of last week’s main event, in which Murphy joined Rollins. Seth then introduces Murphy as his newest disciple, and they hug.

Rollins says Kevin Owens and Samoa Joe pulled out all the stops but he cannot be stopped. Progress cannot be stopped. He says it’s time for everyone else to make a decision because the battle lines have been drawn, and you’re either with them or against them.

Owens and Joe stand on the stage and KO says Seth talks too much. Owens says that Murphy is real proud of what he did to Big Show, but he’ll be back eventually to deal with him. However his biggest problem is that he didn’t get rid of them. Owens says they, and the fans, have heard enough of their stupid voices. So how’s about less talking and more fighting.

Rollins says if they want to fight, they can fight. However it won’t be tonight. They need a proper time and place. Joe interrupts and says he thought he saw a self-proclaimed messiah in the ring, but his ears are hearing another lawyered-up ass-hat. Rollins says he is a forgiving man, it’s in his nature, but the AOP aren’t. So, if the two of them want to fight, they can come on down and dance with destiny. Joe says one of the side-effects of being an ass-hat is bad hearing. They never said they were here alone, and out come The Viking Raiders to lend a hand!

Joe, Owens, Erik, and Ivar storm the ring and start brawling but Rollins quickly leaves and heads up the ramp. Akam eats a Stunner from Owens, while Murphy gets a urinage from Samoa Joe. The heels turn tail and retreat.

We’re back live and Seth is walking backstage with his apostles. Charly Caruso appears and says they seem caught off guard. Seth says he wasn’t, of course he wasn’t, because that was always going to happen. Seth then says if you wan’t a surprise, well he and Buddy Murphy will be challenging The Viking Raiders for the tag titles…tonight! (Why wouldn’t you let AOP do that?)

Andrade gets Rey on the top rope and looks to superplex him onto a ladder but Rey holds the ropes. Andrade turns around and puts Mysterio on his shoulders, but Rey hits a hurricanrana and Andrade mostly misses the ladder but his neck landed on it.

Back live and Rey is punching Andrade, then tries to whip him into a prone ladder in the corner, but Andrade counters by whipping Rey into the buckles. Mysterio tosses Andrade over the ropes to the floor, then climbs onto the ring post and hits a seated senton to Andrade on the floor!

Rey gets Andrade back in the ring and chops his legs. Rey is thrown to the apron but comes back with a springboard senton to Andrade. Rey hits a springboard moonsault but Andrade catches him. Rey hits a hurricanrana that sends Andrade into the prone ladder in the corner!

Rey brings another, bigger, ladder into the ring and sets it beside Andrade, then dropkicks it, sending Andrade from the ring. Rey sets the big ladder up beneath the title and starts climbing but Andrade grabs his foot and pulls him down. Andrade hits Rey with the Three Amigoes, with the final one landing Rey on a ladder!

Andrade sets a ladder from the ladder in the middle of the ring to the middle rope. He then grabs Mysterio, but Rey knocks him back and puts him on the top rope. Mysterio goes for a super hurricanrana, but Andrade grabs hold of him. Andrade then hits Mysterio with a powerbomb off the top rope onto the ladder bridge!

We’re back live and Andrade has a ladder placed in either side of the one in the middle of the ring, both propped up by the buckles opposite. Andrade looks to powerbomb Rey onto one of the ladder bridges but Rey counters with a hurricanrana that sends Andrade into the ring post.

Rey starts climbing the ladder and gets his hands on the belt…but Andrade meets him and delivers a punch. They trade back and forth, then Andrade pulls Rey over the ladder onto his shoulders, onto his back, and looks for a Gory Bomb, but Rey counters with a sunset bomb onto the ladder! Andrade uses the ropes to get back up but Rey hits him with 619 and Andrade flies across the ring and out the other side!

Rey starts climbing the ladder and the fans are going banana’s. Mysterio gets to the apex of the ladder but grabs the title, but Andrade moves the ladder from under him. Mysterio is swinging high above the ring and Andrade grabs his ankles. Mysterio drops down for a hurricanrana, but messes it up and Mysterio lands hard on his back. Mysterio gets to his feet and gives Andrade a back body drop over the top rope!

Rey makes his way to the ladder and starts climbing but on the opposite side Zelina Vega begins scaling it as well. Vega sits atop it to block Rey’s ascent but he climbs up anyway, so she slaps him. Andrade comes up behind Rey and, standing on the bridge, hits the Hammerlock DDT through the ladder! Both men are down and the fans are chanting “holy $hit!”

Andrade gets to his feet and slowly climbs the ladder to retrieve the belt and win the match!

After the match Andrade instructs Vega, who leaves the ring and removes the padding around ringside. Andrade takes Rey from the ring and looks to hit the Hammerlock DDT but someone leaps over the barricade wearing Rey’s mask…

Humberto fights Andrade off and the Champion retreats with his title. Humberto checks on Mysterio as we head to the break.