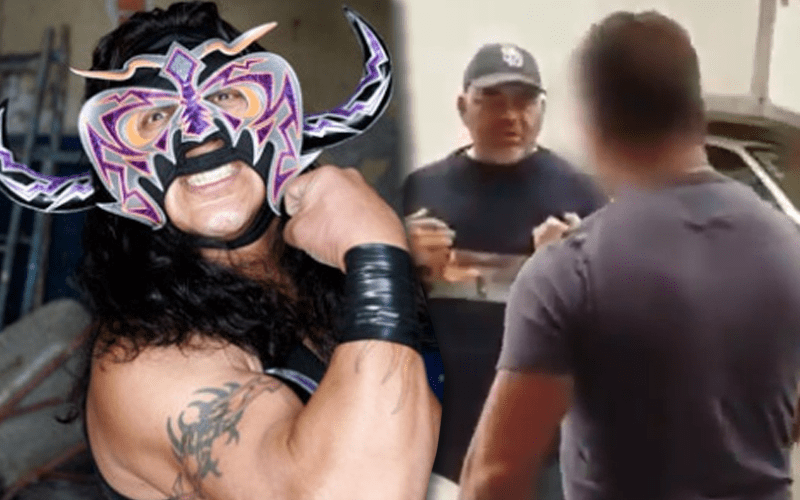 Konnan didn’t have the best conversation with Psicosis II outside of the Impact Wrestling television taping in Mexico City. He got slapped around a bit, but there was a reason for that.

Psicosis recently spoke to President XL and he explained the entire situation. He didn’t mean to cause a bunch of controversy. Psicosis also explained his current working agreement with AAA. In an interview translated from Spanish, Psicosis II said:

“I think what happened yesterday (slapping konnan) caused a lot of controversy. That was not my intention. You know me, I am someone that is calm but if you come looking for trouble. You will find it. This was something I explained to Konnan. So when someone upsets me past my limit, I have to confront them. That’s what happened. It was merely personal reasons that caused that reaction.”

“I am still working for AAA. He is still part of AAA. Even though I get little work from them. Mostly with a few regional promoters. Not on TV. My situation is due to a variety of reasons but that’s not my problem or what caused yesterday’s actions to happen. It was personal.”

“What it is, is that Nicho is a very good friend of his and he (Konnan) boasts that he’s the only Psicosis. That he can do what he pleases and take the character to all these shows and promoters. Konnan told me to fix it however I could. I warned him in October about it.”

“I could not see him until now that I had a show that day.”

When he was asked what he told Konnan, he explained their interaction. He went with friends because he claims to know what kind of person Konnan can be, whatever that might imply.

“Yesterday I went with 2 friends. I know what kind of person he (Konnan) is. So I had someone record our interaction. This way I have proof of what went down. This day that video has been useful because I received a call of complaint that I pushed the woman that came to my side during this and I never pushed her. I only moved her out of path.”

“I’m here. I told you I was going to fix this face to face. What do you have to say?”

Psicosis revealed that Konnan said he had no idea what he was talking about. So, he slapped him. He went on to explain that he wanted Konnan to fight him and put actions behind his words.

“If I was a bad greedy person I would have killed him with blows. But I’m not like that. I’m not going to hurt someone that didn’t even defend themselves. Psicosis demands Konnan does not sell Nicho to other promoters as Psicosis. Or take bookings for Nicho as that character.”

The interviewer on President XL said that he has heard how Konnan mistreats people. He said that Konnan is easily provoked to anger and he accused him of being physically abusive at times as well.

“I have warned Dorian. Konnan is fantastic at managing a TV production, the wrestlers and the locker room.”

It doesn’t sound like Psicosis II is leaving AAA, but there might be some bad stories floating around about Konnan coming out of this situation.

Thanks to Microman Fever for the quotes