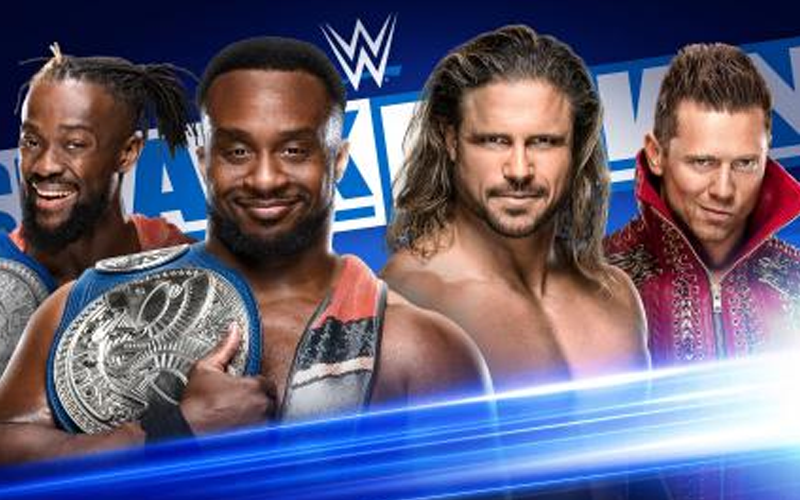 WWE has a few things planned already for Friday Night SmackDown tonight. Let’s see how they are able to build toward the Royal Rumble on January 26th.

Roman Reigns is facing Robert Roode in a Tables Match. The winner of that match gets to pick the stipulation for Reigns vs King Corbin at the Royal Rumble.

Sasha Banks is scheduled to have a match against Lacey Evans tonight. Let’s see if that happens or if The Boss is still in the studio with Snoop Dogg.

Kane is returning to the blue brand tonight as well. We have no idea what that is all about, but he still has a book to plug. He might have a chat with Daniel Bryan as he prepares for The Fiend at the Royal Rumble.

Also, John Morrison is returning to the ring tonight in a match against Big E.

The show started off with a Rocky Johnson memorial graphic. RIP.

He said we’re 9 days away from the Royal Rumble “where 30 lost souls will put their mind, body and spirit on the line for an opportunity of a lifetime, a chance to compete at WrestleMania.”

He said you go through hell, but the reward is a chance at immortality. He hyped his own record for most career eliminations.

Suddenly, Bray Wyatt’s Firefly Fun House appeared on the screen. Bray said Kane hasn’t changed a bit. Then he said “shame on him” for eliminating so many people. He gave Kane a chance to say he’s sorry, but the time ran out.

Then Wyatt assured everyone that Ramblin Rabbit is alive, well and recovering quite nicely. They then showed Ramblin Rabbit hooked up to life support.

Wyatt said that challenging for Title at Mania is a bad idea for anyone. Then Wyatt mentioned how Kane is on The Fiend’s wall of victims. Then Wyatt said he’ll never forget Kane before they showed some highlights of them together. “And neither will he,” Wyatt said before the lights went down and The Fiend appeared.

The Fiend came up through the ring and crawled toward Kane. Kane asked him what took you so long. Then Fiend turned around Bryan hit a running knee and beat on Wyatt until he retreated under the ring again.

Smoke appeared and then Wyatt had the Fiend’s dreadlocks in his hands. Then Bryan started some Yes chants as the red light went away.

Kane got in the ring with Bryan and Team Hell No did some yes chants.

After the commercial, Kayla Braxton talked to Daniel Bryan backstage. He said The Fiend is best at running away and disappearing. Then he asked how do you beat someone every time he’s in trouble? Then he said he has an idea. it’s not a good idea, or a smart idea. Then he said it’s gonna be a strap match at the Royal Rumble.

Big E took advantage early on and then Morrison started to gain control. He put Big E down and hit a standing shooting star press for a two count.

Big E went for a Big Ending, but Morrison got loose. Then he went to the apron, kicked Big E and went for a springboard flip, but Big E dodged it and hit two belly to belly suplexes.

Morrison poked Big E in the eye and then Big E hit a backdrop and a Big Splash.

Kofi sent Miz into the steel steps outside and Morrison hit a dive on Kofi. He got up with a big smile on his face. The Miz saved Morrison from taking a spear from Big E. Morrison nailed a kick through the ropes and a running knee before nailing Starship Pain for the win.

The Usos were backstage with Roman talking about his match tonight. Roman wants to break a table and pick a stipulation for the Royal Rumble.

The Usos vs Revival

Jimmy and Dawson started it off with some basic stuff. Jimmy landed a right hand and tagged Jey. Dash got a blind tag and helped gain an advantage on Jey.

The Top Guys tagged in and out as they worked on Jey. Dawson pulled Jey up to a seated position by his beard and hit a few elbow drops and a headbutt before applying a headlock.

Jimmy finally took a tag and laid Dash and Dawson out with clotheslines before hitting Dash with a Samoan Drop. Then Jimmy hit a crossbody off the top for a two count.

The Revival tried to win with some double team thinking. Then Jey took a tag and laid them out with Superkicks. Jimmy hit a splash on Dash as Jey dove on Dawson. 1-2-3.

The Revival cut a promo backstage about The Revival needing to make a change. Dash said the company cares for them as much as they do the entire tag division. Suddenly, Evans and Bayley were fighting so the camera rushed to them. Banks was sitting on the floor. They did a pull apart and Evans left.

Sonya was backstage with Mandy. Rose is excited for Deville’s match against Bliss tonight. Deville asked if Otis could be ringside. Then Sonya said “she got” the Otis thing with Mandy.

Rose said that Otis is a sweet guy. She can ask him, but she’s not sure if he’ll say yes. Deville said if Rose asks him then he’ll say yes.

Banks is injured and icing her foot through her boot. They’re pissed at Evans. Bayley said she’ll break every bone in Evans body. Adam Pearce showed up. Big pop! He said that they’ve promoted Banks vs Lacey for two weeks. Then he said Bayley is going to take Evans’ place in a non title match.

Adam Pearce was great in this role.