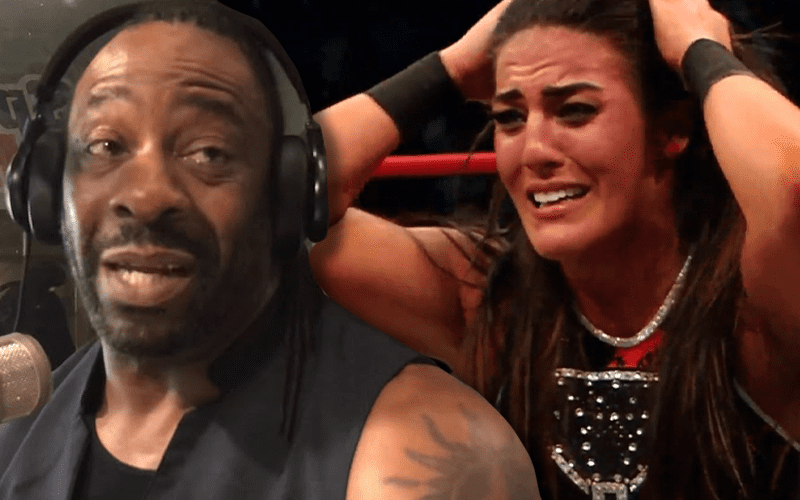 Tessa Blanchard won the Impact World Title, but this took place one day before accusations of her bullying and using racial slurs broke out within the IWC.

Booker T brought up Tessa Blanchard during his Hall Of Fame podcast. He didn’t hold anything back as he flat-out said that Impact Wrestling giving the title to Blanchard was a bad move. In fact, it was the worst move in pro wrestling history.

“I’m not holding my judgement on it. I mean, I’m serious. Big-ups to Tessa Blanchard because she’s good. She’s really good at what she does, but this is the worst decision for an idea that IMPACT Wrestling’s ever had in the history of that company. It’s really that bad. It’s worse than paying me $10 grand for a six hour power commercial that never aired. I’m serious. That’s how ridiculous it is.”

“Because, now the men — all of the men in the company, if they wrestle her and she beats them, it diminishes every guy in the company. I mean, who’s the top guy in the company now? I can’t see ‘The Man’ Becky Lynch wrestling Samoa Joe or Brock Lesnar. I mean, this is the worst idea in the history of wrestling, and to throw it out there, it’s the only way it can really be thrown out and it makes me question and wonder if somebody’s trying to blow this thing up on purpose. Like somebody’s saying, ‘Man, let’s see how bad we can mess this up.’ You know what I’m saying? I’m serious.”

We’ll have to see how this situation pans out for Tessa Blanchard as Impact World Champion. She caused a huge controversy the day before her big win that the company was planning for months. If you ask Booker T here were a lot better ways to book Hard To Kill.