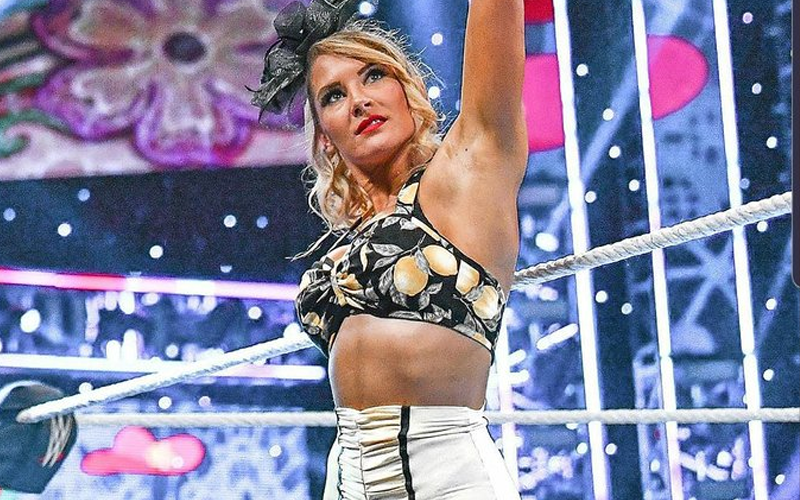 Lacey Evans is in a featured role on WWE television now as she chases the SmackDown Women’s Title. She hasn’t forgotten her roots and that includes never having the desire to be famous.

While on WWE The Bump, The Lady Of WWE spoke about her upbringing. It wasn’t easy for Evans, but WWE provided her with a great platform.

She never wanted to be famous, but through her position as a WWE Superstar Lacey Evans can help others who are in situations she was able to escape. She is also determined to set a good example for her daughter so Summer knows what real work is like.

“I remember where I came from, man. I’ve lived in trailer parks and campers. I never wanted to be famous and I’ll say that until the day I either get released or end up working at McDonald’s, it’s fine. I didn’t want that, but the thought of being able to impact people because of where I come from and knowing what I’m capable of regardless of the cards that I had just motivated the Hell out of me.”

“So, I said you know what? Not only am I going to sign a contract with WWE, but I’m going to take every chance that I can to help them babies who are going through what I went through and help the adults that need the professional help to get off the drugs, to get out of depression and get better.”

“So when I got to NXT and stated making some good money and it’s only going up higher and I didn’t want to forget who I was and I definitely didn’t want to raise a baby who thinks this is how life is because it’s not.”

The future seems bright for Lacey Evans. If she keeps saving money and receiving bigger WWE paychecks she will soon be in a very comfortable position. It sounds like she was already doing pretty well for herself while taking advantage of every opportunity life threw at her.