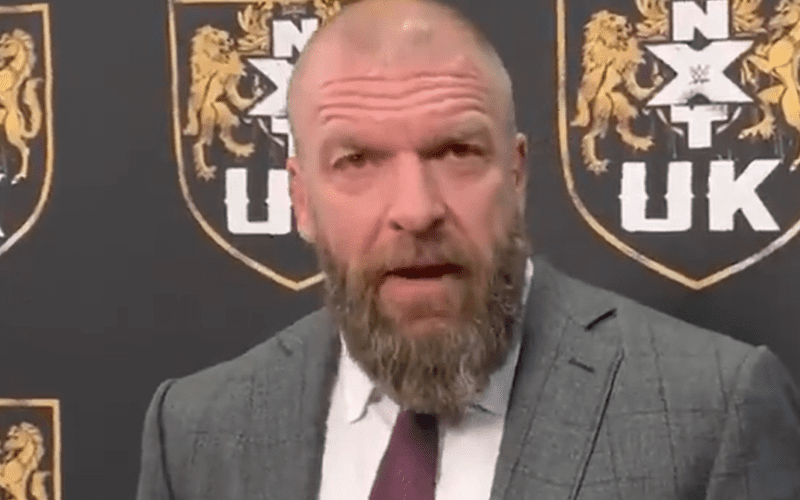 The Undisputed Era rushed the ring during the closing moments of NXT UK TakeOver: Blackpool II. They took out Imperium to add more heat to their Worlds Collide match. This was a big secret that they were able to pull off without a hitch.

While speaking to Gary Cassidy following the TakeOver event Triple H discussed how they were able to keep the Undisputed Era’s appearance a secret. He said that even if fans in Blackpool saw any of the four members before the show they kept it quiet out of respect for what they were trying to do.

“It seems to me anyways that fans of NXT, both in the US and here, they wanna be respectful, I think, to what we’re trying to do, and it seems almost like […] even if somebody tended to see them here, they would be like, “Well, I’m not saying anything, I don’t want to ruin it.” Do you know what I mean?”

“Because, in some ways, I think there is this moment where was have said, “NXT is your brand.” We’ve built it that way. We mean that. If you’re watching, if you’re a fan, if you’re here, you’re a part of this. [You’re] with us. We’re building it from the ground up, and I think that resonates with fans.”

The Undisputed Era might not have been a huge surprise for all of the fans in Blackpool. They certainly seemed to pull off enough of a surprise to shock some fans. Those watching at home on the WWE Network were also none the wiser until the big moment.

We’ll just have to see if Imperium appears at Full Sail Arena between now and the Royal Rumble to get even.