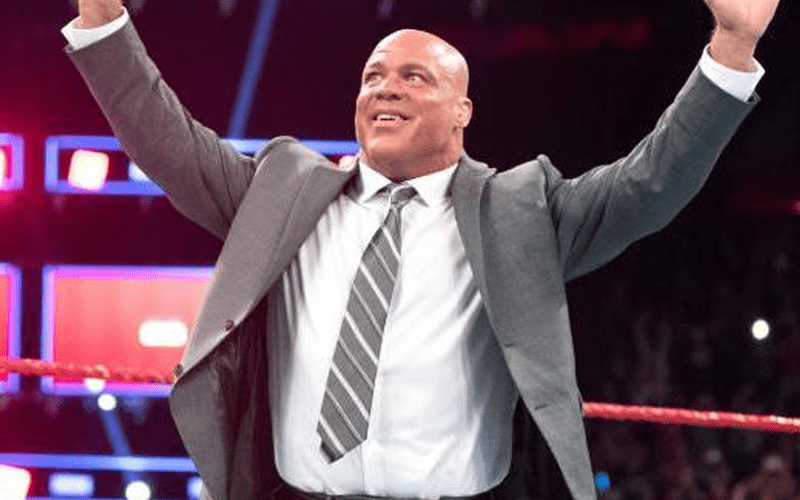 Kurt Angle’s WWE entrance music means that an arena is about to yell: “You Suck!” This is a sign of respect now, but it started much differently.

While speaking to Chris Van Vliet, Angle’s famous “You Suck” chants came up in the conversation. He has learned to love this fan participation portion of the show. Angle gave Edge credit for creating the “You Suck” chants, but it was the fans who kept it going for decades.

“It started with Edge and it did stick. Edge came up with it and I liked it. The thing is the more I went crazy the more they did it and I was like ‘this is cool. I’ve got them. They think they’ve got me, but I’ve got them.'”

“It was a lot of fun doing that especially the night when I told everyone that I earned the right to say that I suck.”

“It’s great and they always will [chant it]. The WWE Universe loves it because any time they can be a part of the show, part of a segment, part of a match, they’re gonna want to be part of that. That’s what it’s all about. That’s why we entertain fans and travel around from arena to arena to let them see a live show. So, the ‘You Suck’ thing is one thing that we do that the fans are able to do every night. Daniel Bryan is ‘Yes, Yes, Yes.’ Or, Austin you have ‘What?’ What the hell is that?”

Kurt Angle doesn’t appear on WWE television much anymore. It won’t be a huge surprise that if and when Angle shows up again the fans will know exactly what to chant along with his music.