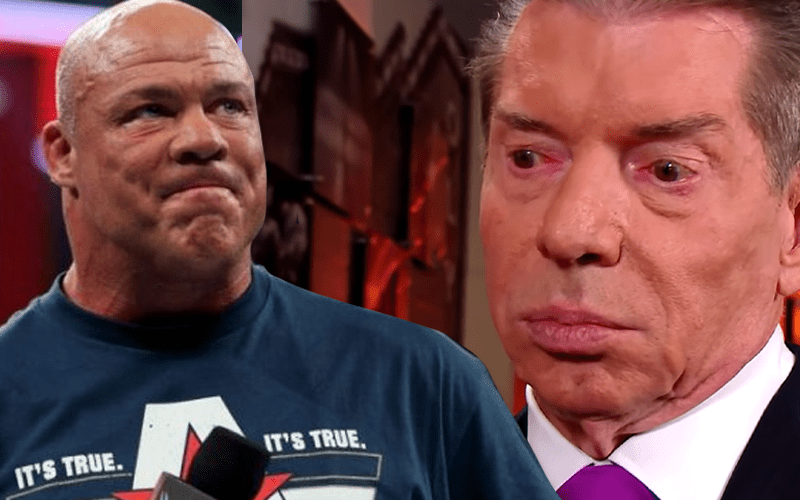 Kurt Angle returned to WWE in 2016 and he was immediately placed into the WWE Hall Of Fame. This honor was well-deserved, but Angle had hoped for more than a HOF induction and a General Manager role.

While speaking with Chris Van Vliet, Angle opened up about what he expected with his WWE return. He stayed in good shape and was keeping the ring rust off as he rested. Still, when he returned to WWE Vince McMahon and Triple H told him that they had other plans for the Olympic Hero.

Kurt Angle went on to reveal that he thought a run like Goldberg or Sting received was in the cards for him, but Vince McMahon saw him as a liability.

“I knew I would go back, I just didn’t know when. I probably waited a couple of years too long. I did stay in great shape when I got back to WWE in 2016. I was ready to wrestle. I took a year off and I wrestled who I wanted I wrestled Rey Mysterio. I wrestle [Alberto] Del Rio. I wrestled Cody Rhodes a couple times, three times actually. So, I was just trying to keep my body fresh and obviously keep enough activity to keep my body in shape that if I did come back to WWE I’d be ready.”

“When I did, Triple H and Vince McMahon pulled me aside and said ‘We’re gonna induct you in the Hall Of Fame first. Is that okay?’ I said, ‘Yeah, but I’d rather wrestle first.'”

“I didn’t have any options and I think I understand why. I don’t think it was to criticize me because I did leave WWE high and dry in 2006. It was my choice to leave and I know Vince McMahon and I didn’t part on good terms and I went straight to the other company [TNA].”

“I think that’s why he had me do the shorter matches. He had me put talent over. He never really ran with me with a title run or anything like that. So, I was expecting that. Goldberg came back [and had a title run] Sting came in and I think he at least had a title match, but it wasn’t in the plans. I don’t blame Vince for that. Me being a liability with my five broken neck and my painkiller problem from a long time. I don’t think he wanted to see me fall back into that.”

Kurt Angle is still with WWE. He’s a backstage producer helping Superstars of today produce matches in the ring. He can also provide a lot of valuable life lessons in the process.

Vince McMahon might have considered Kurt Angle as a liability, but it wasn’t for lack of caring about his well-being.