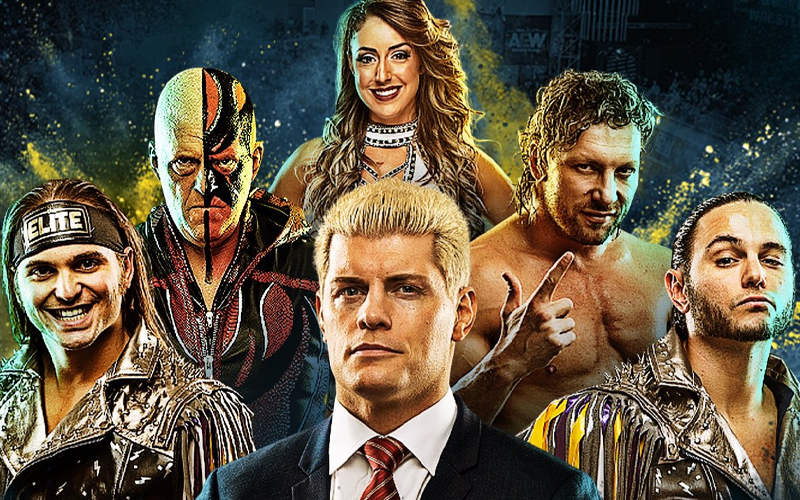 Kris Statlander, the alien, gets her shot at Riho’s AEW Women’s Championship tonight. Last week Riho defended her title in a Fatal 4-Way, but was badly beaten after the match by Nyla Rose. Riho is unlikely to be 100% tonight as she battles the impressive Kris Statlander, who may or may not have The Nightmare Collective in her corner.

Other matches tonight include Christopher Daniels Vs. Sammy Guevara, Hangman Page & Kenny Omega Vs. Private Party, the Lucha Bros Vs. Cody and Dustin Rhodes, and Jurassic Express battling Best Friends. So it’s set to be a tag team heavy episode of AEW, which are usually my least favourite – I know I’m the minority.

However there are two big segments planned for tonight, in which Cody and Jon Moxley answer their respective offers laid forth by MJF and Chris Jericho.

This week’s broadcast of AEW Dynamite opens with Jim Ross, Excalibur, Tony Schiavone, and Dave Brown. Ross mentions that today would have been Elvis Presley’s birthday, and they are indeed in Memphis. Tonight they will pay tribute to Memphis wrestling legends.

We start the match with Page and Mark Quen. They lock-up and the fans are chanting for Hangman. Some trading holds, Page with a shoulder tackle, some drop downs and leap frogs, and Quen dodges a big kick. Page chops the chest of Quen and looks for a suplex but Mark lands on his feet and hits a front-flip dropkick.

Tag to Kassidy who hits a diving stomp onto Page and knocks Omega from the apron. Kassidy chops Page and tags Quen and they hit a double-team series of kicks. Page drops Kassidy, then suplexes Quen onto him. Tag to Omega and they land a series of chops before high-fiving. Backbreaker from Kenny for a two-count.

Hangman is legal again he hits a kitchen sink to Kassidy before knocking Quen from the apron. Omega tags in and he puts Kassidy on the apron but gets caught with a flatliner and both men are down. Quen is tagged along with Page, and Mark sends him over the ropes. Quen hits a dive over the ropes onto Page, followed by one onto Omega.

Kassidy tags in and they hit a double-team tilt-a-whirl into an STO for a two-count. Kassidy looks for a springboard but gets kicked out of mid-air, then Quen jumps in and gets hit with a fallaway slam. Omega tags in and they hit double splashes to Private Party, as well as an assisted German suplex, powerbomb, and a running knee for a near-fall.

Snap-dragon suplex from Omega sends Quen from the ring. He looks for a dive but Kassidy dropkicks him. Kenny tries to launch Kassidy over the ropes but he bounces off of Quen and comes back with Silly String for a near-fall. Quen looks for a shooting star press but Omega avoids it and tags Page. Kenny kicks Kassidy from the apron and holds Quen. Page looks for the Buckshot Lariat but Quen ducks and he almost hits Kenny.

Omega and Page hit Quen with a series of strikes, but Kassidy returns to double-team Page, then hit Gin & Juice to Omega for a near-fall. Hangman knocks Kassidy to the outside, then Omega accidentally flips Quen into Page. Quen fires off on Omega but gets caught with a knee, then Kenny and Page hit a Buckshot Lariat/V-Trigger combo. Kenny hits the One-Winged Angel on Kassidy for the win.

The camera abruptly cuts backstage to find PAC holding Michael Nakazawa in the Rings of Saturn as officials try to pull him off. PAC yells that Omega did this, that he will continue to do this until he gets his rematch.

Riho hits a hurricanrana from the middle rope and Statlander lands on the middle rope. Riho looks for the 619 but Kris grabs her legs. Riho gets hit with a big tilt-a-whirl backbreaker for a two-count.

We’re back live and Kris looks for a moonsault but Riho moves. Riho hits a northern lights suplex for a two-count. Riho heads to the top rope and Statlander hits her, climbing up with her. Stalling vertical suplex from the top from Statlander.

Awesome Kong and the bald woman from The Nightmare Collective come to ringside. Statlander counters Riho with a knee, then lifts her. Riho climbs onto the apron but the bald woman pulls Riho down and throws her into the barricade. Statlander hits her with a suicide dive, then one to Awesome Kong for good measure. Brandi Rhodes comes down and argues with Statlander. Luther, the Japanese wrestling “legend”, comes from under the ring and grabs Statlander, allowing Kong to steamroll her. Riho then climbs to the top rope and dives onto Luther at ringside – the referee doesn’t care as per usual.

Riho and Statlander get back in the ring and restart their match. Riho slams Statlander for a two-count, then Kris hits a powerbomb for a near-fall. Statlander lifts Riho into a Tombstone position but Kong swipes her feet and Riho lands on top of her to score the pinfall.

Kong gets in the ring after the match and attacks Statlander as Riho holds her title. Riho starts attacking Kong but in comes Mel, who beats the Champ down. Hikaru Shida comes in and beats Kong away.

.@shidahikaru helps even the odds for Riho and Kris, but @RealBrittBaker? She’ll just be over here if anyone needs her… #AEWDynamite #AEWonTNT pic.twitter.com/NYYYE7QaTV

We get a promo video for Kip Sabian. Shinedown’s guitarist, Zach Meyers is shown at ringside.

This match gets underway and they lock-up, with Sammy taking a wrist. Shoulder-tackle from Daniels, then catches Sammy with an arm-drag. Daniels has more years wrestling experience than Guevara has been alive. Another arm-drag, hip-toss, and a scoop slam from Daniels.

Guevara back-tracks to the corner and Daniels chops the chest. Guevara uses the referee to sneak a cheap shot, then hit a jumping stomp to Daniels. A backslam earns Sammy a two-count, then he chokes Daniels using the ropes. Guevara does a Ric Flair strut, then takes a side headlock. Daniels fights up but Sammy connects with an enziguiri.

Guevara takes to the top and looks for a 450 but Daniels moves. Daniels hits an exploder suplex, followed by a back body drop, dropkick, and a clothesline. Blue thunder bomb earns a two-count for Daniels, then he looks for Angel’s Wings but Guevara counters and hits a running knee and a shooting star press for a near-fall. They exchange pinfall attempts before taking each other out with stereo lariats.

Sammy misses a splash and gets caught with an STO. Pentagon Jr. comes onto the ramp and addresses Daniels, asking if he can hit the Arabian moonsault – the move Daniels botched a few weeks ago. Guevara uses the distraction to superkick Daniels and get the win.

After the match, Dark Order come out. Evil Uno addresses Christopher Daniels and says he’s one of the all-time greats. A man whose fingerprints are all over professional wrestling in the modern era. And a man who, had he not met 15 years ago, he wouldn’t be here himself. They get to the ring and Uno says AEW unfortunately does not see Daniels as the lucrative talent that he does. And these fans say Daniels has lost a step. But he can bring him back from the brink. He hands Daniels a mask and he considers putting it on but then throws it at him. The Order beat on Daniels until out come Kazarian and Sky, followed by the Young Bucks. The five of them clean the ring.