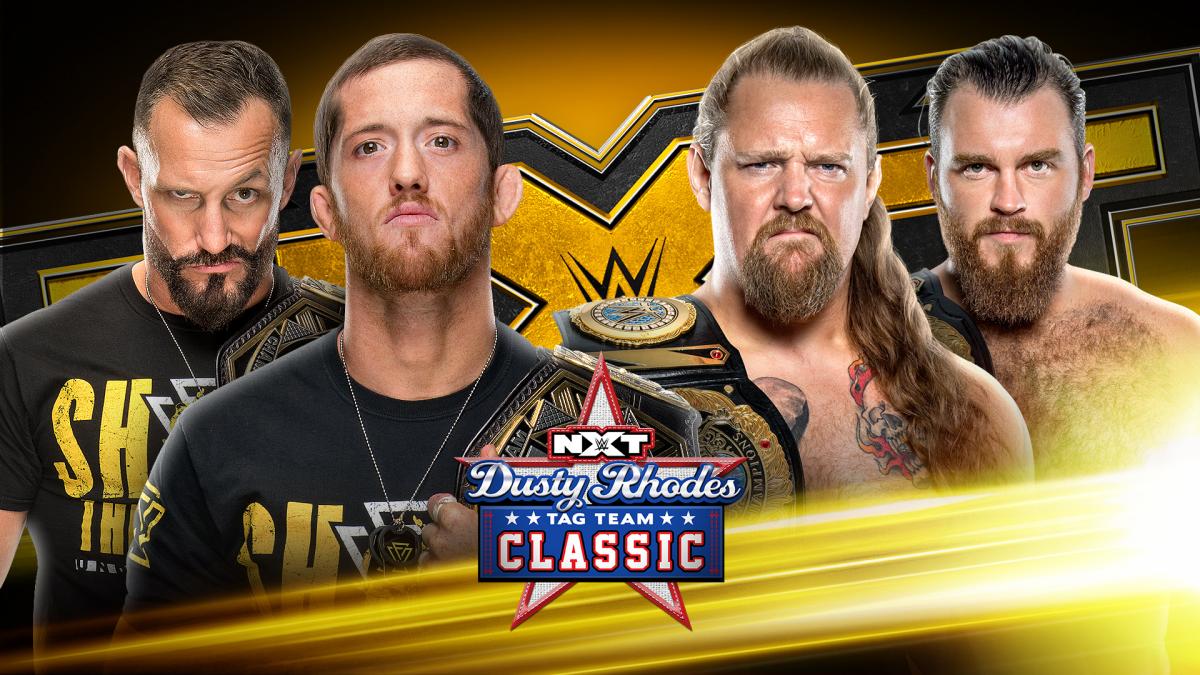 Thanks for joining Ringside News’ live WWE NXT results. We will get started as soon as the show does to give you live results throughout the night.

Rhea Ripley is the new WWE NXT Women’s Champion so we will see what’s next for her tonight.

The Undisputed Era will face Gallus in the first round of the Dusty Rhodes Tag Team Classic. The Forgotten Sons will also battle Imperium.

There will also be a fatal four-way match to determine a new #1 contender for the NXT North American Title. Keith Lee, Dominik Dijakovic, Cameron Grimes and Damian Priest will battle for an opportunity to face Roderick Strong.

Rhea Ripley came out. She got “You deserve it chants.” Rhea started talking about memories like becoming the NXT Women’s Champion. Then Toni Storm came out. That’s a nice surprise.

Toni congratulated her Rhea, but she reminded her of how she beat her twice. Storm said that she’s going to become NXT UK Women’s Champion at NXT UK TakeOver: Blackpool II. Then at Worlds Collide she’ll become double champion. Then Rhea Ripley accepted before Kay Lee Ray came out.

Ray said there’s no way Toni is taking the title at TakeOver Blackpool. Then Io Shirai came out. Io spoke in Japanese, pointed at the title and said: “Mine.”

Bianca Belair came out next. She got some “EST”chants. She said that she’s better than you, you, and then pointed to Toni and said, “you don’t even go here.” Nice Mean Girls reference. Out next was Candice LeRae.

Then Rhea Ripley started punching people. Everyone scattered with Toni, Candice, and Rhea left in the ring. Then they started a six woman tag match.

Candice started out with a dive to take out the heels. Then they went to commercial.

When we came back, Candice and Kay Lee Ray were in the ring. LeRae went for a dive, but Ray kicked her on the way down. After that, Candice started taking abuse and selling. Io tagged in next to apply more pressure on her.

Candice tried to fight back, but the heels kept avoiding her attempts at offense as they tagged in and out. LeRae got close, but they kept stopping her. She took a nice swanton bomb from Ray. Rhea came in and hit a couple dropkicks. LeRae kicked Io and then everyone was down.

Candice hit a Poisonrana and created some separation before finally tagging Toni Storm who started to rally on Ray with a suplex and a sliding forearm for a two count.

Io tagged in and hit running double knees in the corner and a butterfly backbreaker. Then Belair tagged herself in and Io hit her with a missile dropkick to screw over her own team.

Ripley nailed Belair with a running big boot, some knee strikes, a dropkick, and a Riptide for the win.

Candice took some time handing Ripley the title before they all celebrated.

These two team started off strong. Blake nailed a DDT before Aichner and Cutler went at it. Then Cutler hit a butterfly backbreaker and got a two count before transitioning right into a Boston Crab.

They continued with fast-paced action and Blake made a blind tag as Cutler was sent out of the ring. Blake hit a lariat on Barthel and then Barthel got his knees up on a moonsault off the ropes. This was one move after another very quickly.

Finally, Imperium got the pinfall after a double team move.

These two were evenly matched in the early going until Theory ended up taking control. He hit a stomp to the chest followed by a fisherman’s suplex for a two count.

Then Theory continued to keep Wilde down until he hit a TKO for the win.

Wolfgang started out by charging both Fish & O’Reilly to take them down and start on the offensive. He continue to fight Kyle before Coffey took the tag. Then Fish took the tag and delivered a knee strike to turn things around for himself.

Coffey tossed Fish across the ring and hit a back bodydrop on Fish. Then Gallus used a doubleteam monkey flip to send Fish into the corner. Wofie continued to abuse Fish until Undisputed Era distracted Wolfgang giving an opening for Fish to tag O’Reilly and maintain control.

Mark Coffey tagged back in and hit a bodyslam before continuing the abuse on O’Reilly. Wolfgang tagged in and hit a flying senton for a two count. Then Undisputed Era was knocked off the apron as they had a stand-off before going to commercial.

When we came back from commercial, Undisputed Era was isolating Wofie. They hit a double kick for a two count. Fish continued to work on Wolfgang until he was able to come back with a slam, but O’Reilly jumped in to stop Wofie from getting to Coffey.

Then Coffey finally got the tag. He hit a running uppercut on O’Reilly and a double ax handle to the chest before slamming O’Reilly down for a two count.

Fish took the tag and they nailed a double kick for a two count. Undisputed Era hit some tandem running strikes and kicks before Coffey blocked one and nailed a suplex. He tagged in Wolfgang who hit catapult into a Samoan Drop for a two count.

Coffey hit a dive to the outside on the Undisputed Era. Cole distracted Wolfie and then they got the win with their Chasing The Dragon finisher.