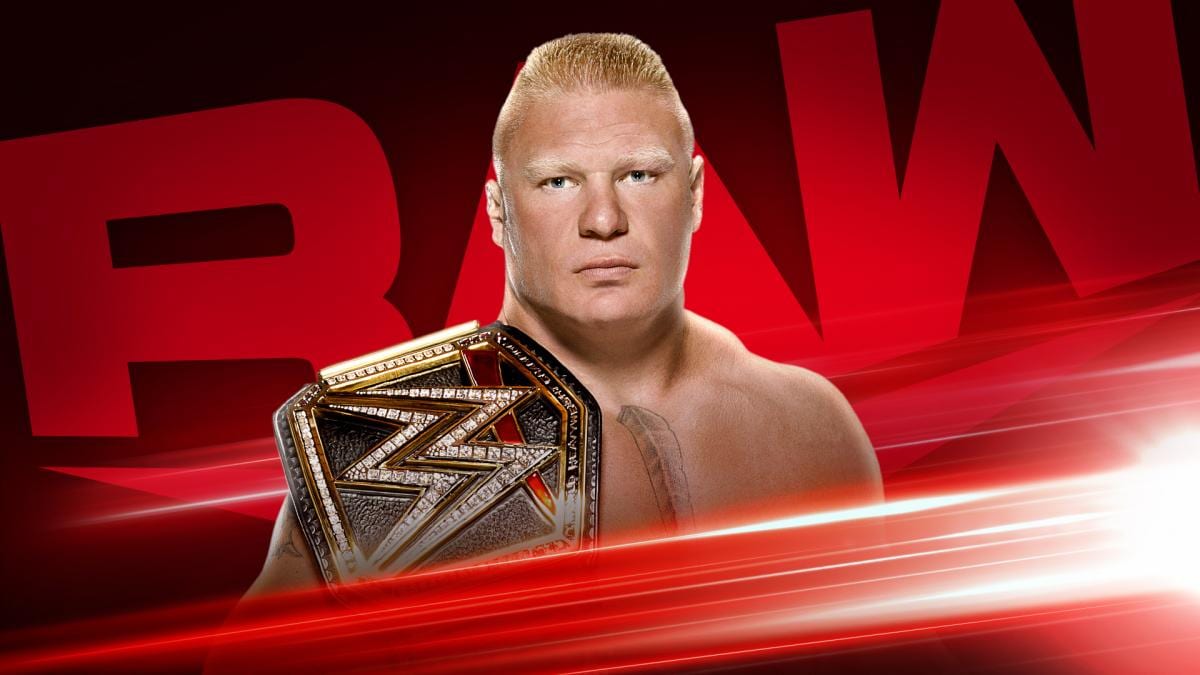 Welcome to Ringside News’ results for WWE Raw on January 6th, 2020.
Tonight’s Raw has us just a few weeks away from the 2020 Royal Rumble, and that means we’re on that long, winding, confusing road to WrestleMania. Which, of course, means our WWE Champion will be returning tonight. For one of the first times ever, the WrestleMania card is wide open, so we have no idea who Lesnar will be facing at Royal Rumble, let alone in April. Tonight we should get an idea of who The Beast will slay next.
The big match confirmed for tonight’s show will see The Viking Raiders defend their Tag Team Championships against The O.C. and Street Profits. This match was born just last week and has the potential to shake-up the division. Although more than likely it will serve as a springboard for a match at the Rumble.
The only other confirmed match for tonight is also a title showdown, and it will see Rey Mysterio get a rematch for the United States Championship against Andrade. El Idolo has been pissing everyone off with his violent antics as of late, so Rey will look to put a stop to that tonight.
And that’s about all we know of tonight’s Raw. There will be some fallout from the big wedding last week, as well as people announcing themselves for the Rumble, and more drama between Seth Rollins and Kevin Owens. Follow along here for results, and join us on Instagram and Twitter. Enjoy the show!

Monday Night Raw opens with a look back at last week’s mad wedding between Bobby Lashley and Lana, which ended with them being attacked by Rusev and Liv Morgan.

We go live to the arena and the WWE Champion, Brock Lesnar, coming to the ring with his advocate, Paul Heyman.
The fans boo and Heyman says “a happy new year to you too bitches”. He then introduces the two of them, and says he wants to kick-off the new decade by making history. Because that’s what Brock Lesnar does. Heyman says that Brock is wondering who will challenge him for the WWE Championship at the Royal Rumble, but that nobody is worthy of facing him. Not from Raw, SmackDown, or NXT. The fans boo and Heyman tells them they aren’t allowed to.
Heyman says they can’t boo when Brock Lesnar is about to do something unprecedented. Something that will legitimately be “first-time ever”. Heyman says that Lesnar makes history wherever he goes. Paul asks the fans if they want a dream match? He says Brock Lesnar will be entering the Royal Rumble match, and entering at number 1. And that means Brock will face Roman Reigns, Seth Rollins, and whoever else enters the match. And Brock Lesnar will be the last man standing. And that’s not just a prediction, that’s a spoiler.
Sarah Schrieber is backstage with Rey Mysterio. She asks how much the match against Andrade means tonight? Rey says it means everything because, at this point in his career, he only has days left, not years. Mysterio thanks his son for convincing him to continue on and tonight he defeats Andrade, because he doesn’t deserve to represent their people.

The match begins and Andrade rushes Rey in the corner. Mysterio ducks Andrade and sends him from the ring with a headscissors. Rey slides under the ropes and catches Andrade with another headscissors takedown on the floor. Rey gets Andrade back in the ring for a one-count.
Andrade connects with a shot to Rey, then the action spills to the floor. Rey jumps onto Andrade’s shoulders, then rolls forward and sends him flying, face-first into the steel steps! Rey gets Andrade back in the ring but gets caught with a dropkick.
*Commercial Break*
Back live and Andrade catches Rey with a sunset flip but Mysterio rolls through and kicks him in the face. Rey builds a head of steam and plants Andrade with a tilt-a-whirl DDT for a near-fall. Rey takes to the top rope but Andrade attacks him and puts him in the tree of woe facing the floor. Andrade looks for the double stomp but Rey avoids it and Andrade crashes to the floor.
Rey slides under the ropes to hit a sunset bomb on the floor…but Andrade rolls through and connects with double knees. Andrade gets Rey back in the ring and hits a tope for a two-count. Andrade drops Rey with a spinning back elbow for another two-count, then Mysterio counters him with an incredible flipping Canadian Destroyer. Rey pins and gets the three count…but Zelina put Andrade’s foot on the rope! The referee tries to figure out what happened as we head to the break.

*Commercial Break*
We return and the match is back underway. Andrade misses a leaping knee in the corner and flies over the ropes to the floor. Mysterio runs off the apron with a hurricanrana that sends Andrade into the barricade! Rey gets him back in the ring for a near-fall.
The action spills onto the apron and Rey hits a sunset flip bomb into the ring post, then gets him back in the ring for a top rope leg drop and a near-fall. “This is awesome!” Andrade fires back and beats Rey into the corner. He looks for double knees but Rey avoids it. Mysterio hits a hurricanrana to plant Andrade on the middle rope. Rey hits 619, then heads to the top rope but Andrade rolls from the ring.

Andrade and Vega are at ringside and Rey jumps onto Andrade, who throws him off and inadvertently into Vega. Rey checks on Vega, but Andrade grabs him and tosses him into the steel steps. Andrade gets Rey back in the ring and goes to hit the Hammerlock DDT but the referee stops him and forces Rey to leave the ring for some reason. Mysterio stands around on the floor, trying to get his bearings, then gets back inside and Andrade hits the DDT for the win.

As soon as the match is over, Andrade grabs his belt, then rips Rey’s mask off and takes it out to Vega as a peace-offering. My guess is that the referee worried that Rey was concussed after the shot into the steps, hence the awkward ending.
Charly Caruso interviews Kevin Owens and Samoa Joe backstage. She asks what they think of Seth Rollins’ comment that they’re out for themselves, not a team. Owens says it’s no secret that neither of them play well with others, but they know when they need back-up. Joe challenges AOP and Rollins to a match tonight, and says he has a number three to help them out.
*Commercial Break*
Seth Rollins is walking backstage with the Author’s of Pain. Charly Caruso approaches and tells them about the challenge laid before them. Seth says he seeks challenges every day of his life. And his big challenge right now is to take Raw to the next level. He didn’t ask to be the chosen one, the WWE Universe chose him. He has sacrificed everything to be the messiah of Monday nights. Seth says nobody stands by Kevin Owens or Samoa Joe, while they are a united front.