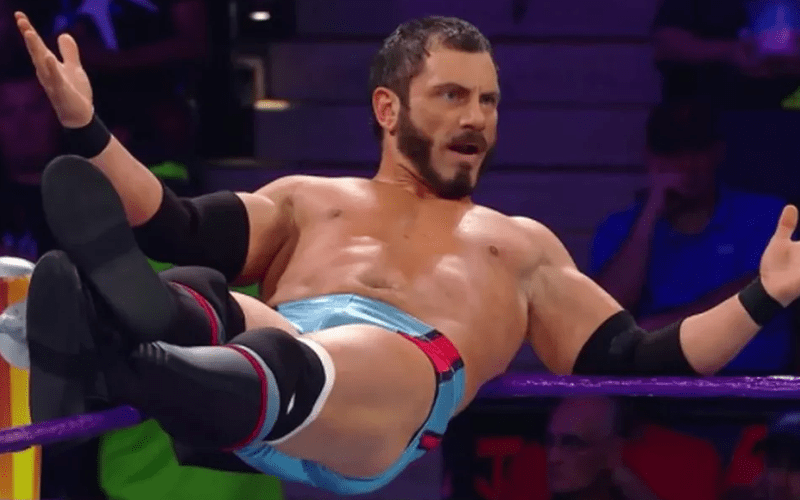 Austin Aries was released from WWE and it was a very sudden departure. Rumors began to swirl about why he was let go from the company. To this day he still isn’t certain as to why he was released.

While speaking to Chris Van Vliet, Aries explained that he was taken out of action because he started to feel numbness in his fingers. Then a day after he started rehabbing his injury at the WWE Performance Center, Triple H called him and let A Double go without any explanation except to say it was a Vince McMahon decision.

“I was talking to the doctor because I was starting to have some sensation loss and the issues were kinda getting worse, you know? So I just said to him, ‘Hey man this program is kinda finished up I don’t know if they have any plans for me so this could be a good time to get f*cking healthy.'”

“So this is the nuts and bolts. On a Wednesday I got a call from the doctor and he left a message like, ‘Hey we’re moving you to not cleared for contact and giving you at least a month off rehabbing your neck. We’ll go from there so go to the Performance Center tomorrow and start rehab.’ Thursday I went to the PC and started my rehab. I was actually kinda relieved. Like, it’s nice to get a break. Like still get to make some money, but heal up some nagging injuries maybe work on some things. I get to be home, recharge, take care of some house sh*t like I’m buying a condo at the time like I’ve got personal life sh*t you’re trying to deal with.”

“So it was nice to say, ‘Okay cool I just had this awesome f*cking stretch and because 205 Live was on Tuesdays and RAW and SmackDown, we were on the road an extra day than everyone else because we were doing both TV shows and then we’d go home and me and Neville since we were the 205 Live program we were on the road. So I’d get home Wednesday and I would be back out Friday morning so I had like 36 hours at home.”

“It was nice to be like I’m gonna have a month to do this. So, yeah that was Thursday and Friday I got a call from Triple H and he said I was being released. He said he was really shocked. He was as shocked as I was. It was per Vince [McMahon]. He just didn’t have anything for me and that was it.”

“I asked him some questions like if it was contract things we were negotiating, you know? I was literally surprised because there were no issues. I hadn’t had any issues with anybody.”

“I know I can be a f*cking handful, alright? Like I can be a f*cking nightmare I’m not gonna skirt around that and some of those [rumors] are earned and when you put them out there it paints a fuller picture and you’re still saying I’m an asshole and that’s fine. I’m just saying that in this situation I wasn’t going out of my way. I wasn’t expressing any frustrations. The only thing I said to express my frustrations creatively was ‘Hey I have no value left as a cruiserweight’ like it’s not really my role anyway. Like, I didn’t get over by being a babyface on commentary. It was just that Neville was so f*cking hot as a heel and Vince wanted me and Neville so well so I was a babyface.”

He went on to explain that he asked to be sent back to NXT or even commentary, but he didn’t think a babyface role on 205 Live suited him. He was open to anything, even becoming a heel on 205 Live, but “the only thing I don’t want to continue to do is be a cruiserweight babyface because you’ve killed my value.”

Austin Aries might not have reached his full potential in WWE, but now he is doing his own thing. It will be interesting to see where Austin Aries ends up in 2020, but he made a good point that his best role is as a heel lifting up other guys to be stronger.