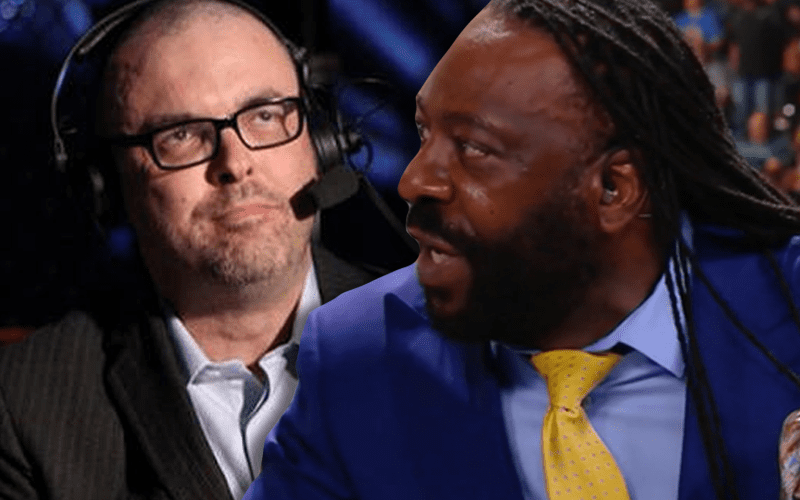 Mauro Ranallo deactivated his Twitter account after Corey Graves sent off a tweet about his NXT TakeOver: WarGames announcing job. This was supposed to be seen as something to further drive the storyline into Survivor Series, but Ranallo didn’t see it that way.

During the Hall Of Fame podcast, Booker T opened up about the current Mauro Ranallo situation. He understands how it feels to be ribbed and he didn’t like it either. The 5 time World Champion then said that Mauro Ranallo needs to get back on the horse and get his ass back to work.

“People don’t understand the power of those characters and photos. You can’t be just saying anything in 2019 and expect for it to be swept under the rug. I really don’t know what happened. I know Corey Graves put out an apology to Mauro. I don’t know what really sparked it or what is really going on behind the scenes. I’ll be at the pay-per-view in three weeks and I’ll be like Peter Parker.”

“Mauro Ranallo, get yourself together. Big ups to everything you do because I know how hard you work. The angle thing, back in the day, I hated getting ribbed. If they ribbed me, no one would tell me whoever did it. I would always say, ‘You can rib me if you want, but if I find out who did it, you’re gonna be in a fight. Just letting you know.’ Don’t play with me like that, because I’m not to be played with.”

“Shoutout to Mauro, get yourself together, get back on the horse. Get your ass back to work, bro. Don’t let somebody stop you from doing what you do. That’s just word.”

Dave Meltzer said that Mauro Ranallo is getting better and he is in communication with WWE. Hopefully, that means Mauro Ranallo is headed back to Full Sail Arena soon because Lio Rush isn’t the only person who misses having Mauro Ranallo on NXT commentary.