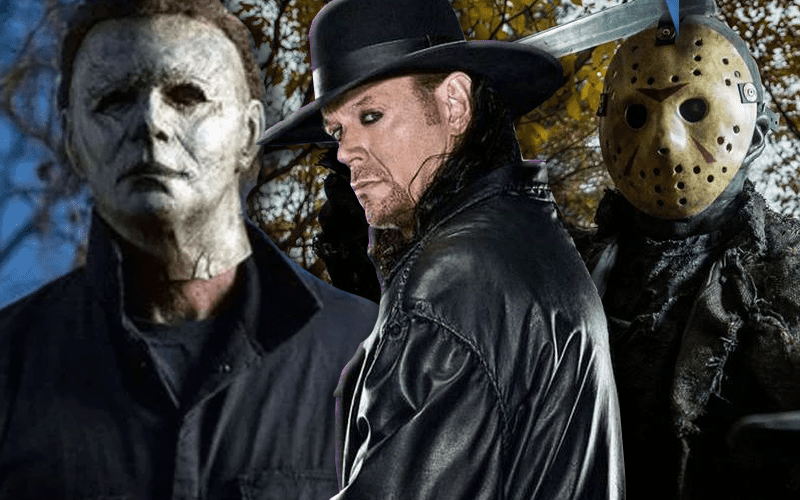 The Undertaker had a few different characters before Vince McMahon gave him the persona that stuck for decades. Before The Dead Man donned the old west undertaker outfit, he was a much different character in the ring. This was something that he had to learn.

While speaking to The Broken Skull Sessions, The Undertaker explained how his in-ring work adopted many characteristics from horror movies.

He really drew inspiration from Michael Myers and Jason Voorhees as they didn’t seem to ever run, but they were always around when the moment was right to strike.

“It was cool, the look and everything was really cool it just took me a while to put it together.”

“As I thought more about the character and what I could do athletically my presentation became, ‘I wanna lull people in I wanna stalk somebody when I get ’em hurt. I want people to feel like the Boogeyman is gonna come down the hallway and grab ya, right?’ That’s what I was trying and honestly, I don’t know why, but it clicked.”

“Michael Myers and Jason Voorhees and Friday The 13th I wanted to be like those guys were like those guys never moved fast at all, but they always seemed to be at the right place when it was time to cut somebody’s throat.”

“So I had to move slow and I had to make myself because believe me there was that time when I wanted to hit the ropes and take off and hit that flying clothesline, but I realized that it’s not gonna work if the work doesn’t match the character and the character lent itself to being the Boogeyman and the Boogeyman just shows up.”

“So I would lull people in with a false sense and then — bang — quick I would hit something fast — boom — and then throttle it back down. It took a while until I didn’t have to think about it. It got to where it was second nature. I had to fight it at first because I just wanted to go because ‘Dude, you can jump over this rope and land on your feet if you wanna do that’ and it would have been fine, but that whole thing would have fizzled out in three years.”

“So I don’t profess to being a guru, but fortunately I realized that I needed to pull back to move forward.”

The Undertaker was able to use this “Boogeyman” persona long before the Boogeyman was actually a character in WWE. He originated fear in many ways and innovated the concept of where the line is between fantasy and horror in a pro wrestling ring. It turns out that he did that with a little help from some terrifying influences.