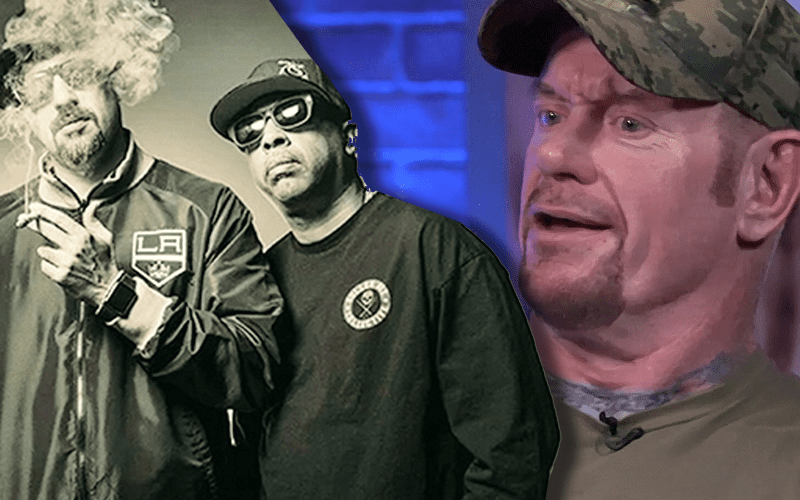 The Undertaker has plenty of stories to tell. He lived through a ton of experiences throughout his legendary career and he did his fair share of partying too. It turns out that his intake might have been a little bit above a rock star level.

During The Broken Skull Sessions, Steve Austin brought up a story about Cypress Hill being at the same hotel as The Undertaker. Then The Dead Man expanded on this tale where he told a pretty unbelievable account of partying until he put the legendary rap group to bed.

“I think it was pretty commonly known back then that I burnt the midnight oil. I wasn’t always first, but there was always that comradely with the guys I really enjoyed. It had a lot to do with drinking whiskey, hanging out, and telling stories like we all do. Any time we get together we’re telling stories.”

“So this was in the back side of probably a 17 day tour and I’m like ‘Alright guys, look I’ve been going hard every night I’m gonna stay in. I’m gonna take a break, we’ve still got three or four days left.’ I had to pace myself. One day out of 17 I was gonna take off.”

“We had Amsterdam and Berlin and all these places coming up I wanted to be fresh and ready to go, right? I get to my room and I go I’m gonna go to the bar and say hello to everybody and the I’m gonna go to my room, I’m gonna go to bed. So I go strolling in the bar, I’ve still got my bags — ‘Take! Take! Take! Take!’ someone’s screaming, you know ‘Come here, Take, come over here!’ It was our guys, but then it was some of the guys from Cypress Hill. They were on tour over there, ‘Hey guys what’s going on,’ you know?”

“I’m being polite, asking them tour questions and all that and then it was like, ‘Okay man I’m gonna head down the road, you know?’ Then I turned around and I heard, ‘Oh man I heard you could party!’ It was like I turned around and said ‘Yeah, I’ve been going pretty good,’ you know.”

“Then somebody else mouthed off and it was like, ‘Okay, I’m staying.’ Somebody smarted off a little, they had no ill will, but it was a moment and that’s how it was sometimes I get, ‘You probably shouldn’t have said that.'”

“So here we go and we drank all the whiskey. So we close the bar down and there’s still people standing upright, right? So I don’t know how I ended up, it was me and X-Pac and we ended up in one of the guys’ [from Cypress Hill] rooms and they’re known for their cannabis intake, you know that’s never been my deal, but I remember sitting in this room with people I didn’t really know and there was this haze kinda like the fog had some and sit down at a different level, right? I’m sitting at the desk and I’m looking around and there are probably only two people that are upright and there are like bodies laid out everywhere and I turned to say something to X-Pac and X-Pac is asleep on my shoulder, right?”

“I gave X-Pac the nudge and he’s like, ‘What up, Take?” like he’s been there the whole time, right? I said, ‘Kid, I think our work here’s done.’ He went, ‘Oh, okay alright.’ So, I pick him up, the door opens and a big plume of smoke falls out into the hallway, it’s like the gunfight at the OK Corral, believe me, I was feeling it.”

“I remember coming down the next day and I felt bad the next morning. We had an early call and I’m telling myself ‘You’re gonna go down there and be cool,’ but my head’s pounding and I go down there and I’m like ‘Hey guys’ and they’re still trying to call guys to get them out of their rooms and I’m just no-selling it.”

The Undertaker maintained his image as a locker room leader and an epic partier at the same time. This is just one of the amazing stories he told during that interview, but it is certainly one that will stick in our minds for a very long time.