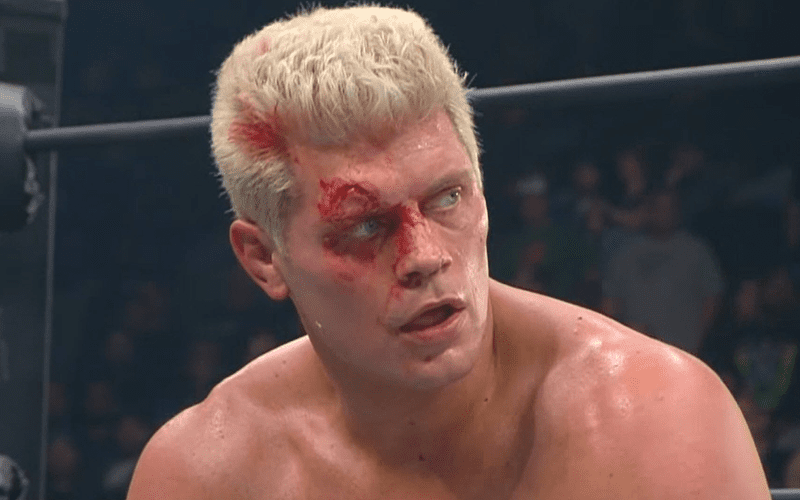 Cody Rhodes lost a huge match at Full Gear. Because he was unable to defeat Chris Jericho in Baltimore, he will never get another chance to battle for the AEW World Title.

The American Nightmare released a lengthy public statement about this unfortunate time in his career. He cannot change what happened and he can only move on from this point. Cody Rhodes had a chance to thank those who have been supporting him during this time including his wife Brandi Rhodes and of course, Pharaoh.

Lovely snap my Wife got of Pharaoh and I days removed from the biggest loss of my professional career. Nothing positive will come from whining/pointing fingers. I’d like to thank everybody who attended Full Gear & Dynamite this last week, from Baltimore to Nashville…some of the loudest and loveliest fans ever.

Both cities did it “AEW style” by not just making it about a single event, but instead turning multiple days into a party and destination. I’d like to thank Tony Khan and my fellow EVPs. As well as Keith Mitchell, Tim Walbert, Rafael, Sandra, Janet, Stella, Chris H, Jeff J, QT Marshall, Jim Ross/Excalibur, Steve Yu & Dylan at Comeback Studios, and the long list of invaluable soldiers who were able to bring together such a first-rate production.

I’d also like to extend my gratitude to the Baltimore Commission and Dr Michael Sampson for treating my cut and allowing the World Title match to proceed for the fans in attendance. The end result is not something I can accept, it was my call/choice to make and nobody else’s.

I can’t change it, but I can move forward and hopefully find some vindication. Need to heal, train, and most importantly DO THE WORK. Lesson here: always trust your dog.

AEW made the decision to stick with this stipulation as a means to show fans that matches will have consequences in All Elite Wrestling.

It is a rather hard pill to swallow, especially for fans who really wanted to see Cody Rhodes hold the title he helped create. You never know what could happen in the future, but it sounds like Cody Rhodes is accepting this decision regardless of if MJF prematurely threw in the towel before turning on him.