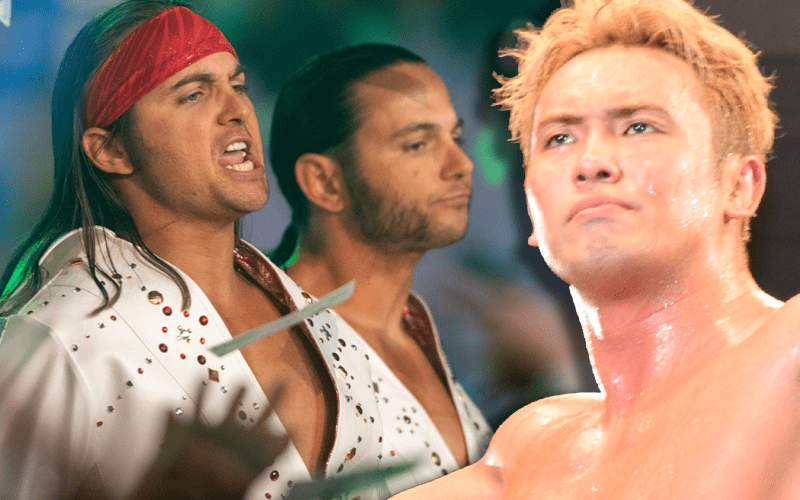 Kazuchika Okada’s time in TNA is legendary because of how badly they misused him. The Young Bucks are very glad he spent some time in TNA though.

Nick Jackson said during The Young Bucks’ Starrcast IV show that they became very close with Okada during their TNA days. They might have actually lost money working for TNA, but they made a great friend.

This friendship was cemented in a big way when Okada came to them after TNA management wanted him to blade.

“There was one time when TNA wanted [Okada] to bleed and he was very uncomfortable about this situation and I remember Matt and I he came up and told us ‘Hey these guys want me to cut my forehead’ and we’re like – What?!”

“He wasn’t even being booked so we went to bat for him and we helped him get out of that situation and I felt like he liked that a lot that we helped him out on that and later on it probably paid off for us, you know what I mean?”

Matt Jackson said that they bonded with Okada over this situation and they became good friends. Nick said they became best friends with Okada and ate with him every day as well. He also said that during every single show, Okada would put on his Young Bucks gear and hide to surprise him — “every single time.”

Matt Jackson said that he would look through his cell phone and randomly find 50 selfies of Okada because he found his phone unlocked. It’s great to have a friend like Okada, just don’t leave your cell phone unlocked around him.

They said that later on, Okada put in a good word for them with NJPW when they were looking for Jr Tag Teams. They didn’t believe that the call to New Japan was real until Matt Jackson got a Facebook message from Okada telling them to pack their bags.