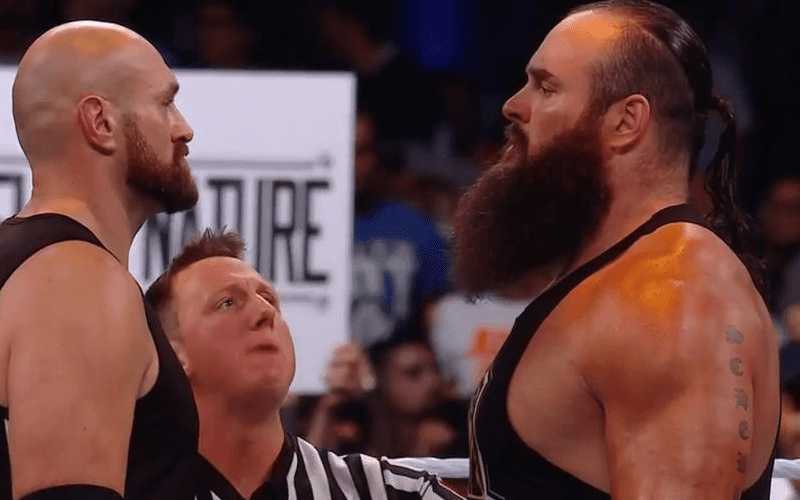 Tyson Fury is the Lineal Boxing Champion and undefeated in the ring. He had his first match at WWE Crown Jewel which could be his only match so he needed to make it count.

After a lengthy and very impressive pyrotechnic show, Tyson Fury finally came out to the ring. Then the match got started.

The two had a slow start and then Fury was taken down by Strowman. Fury sold for Braun as he continued to knock him around with clubbing blows. Then Fury avoided Braun’s charge to the corner and Strowman’s shoulder smashed against the post.

Fury went on the offensive and kicked Strowman in the face. Then he went outside and Braun brought him down with a right hand.

Strowman went for his charge around the ring and Fury met him with a dropkick counter while using the ring apron for the assist. They returned to the ring and Fury avoided a running powerslam and hit a drop toe hold and a big boot for a two count.

Braun continued his assault after gaining advantage once again. Then he sent Fury to the canvas with a clubbing blow. Tyson Fury sat up like The Undertaker and delivered another boot.

Fury charged at Strowman once again and he was slammed to the mat. When Fury rolled out of the ring, Strowman hit him with two tackles as he ran around the ring.

Fury was sent back inside and then he met Braun Strowman with a right hand before The Monster Among Men could get back in. This sent him outside and the referee counted to 10.

That is how Tyson Fury won via count-out at WWE Crown Jewel.

Obviously, he couldn’t suffer a loss and this was the best way possible for the match to end without Braun Strowman looking too bad. After it was all over, Strowman delivered a running powerslam on Fury who pretty much no-sold it.