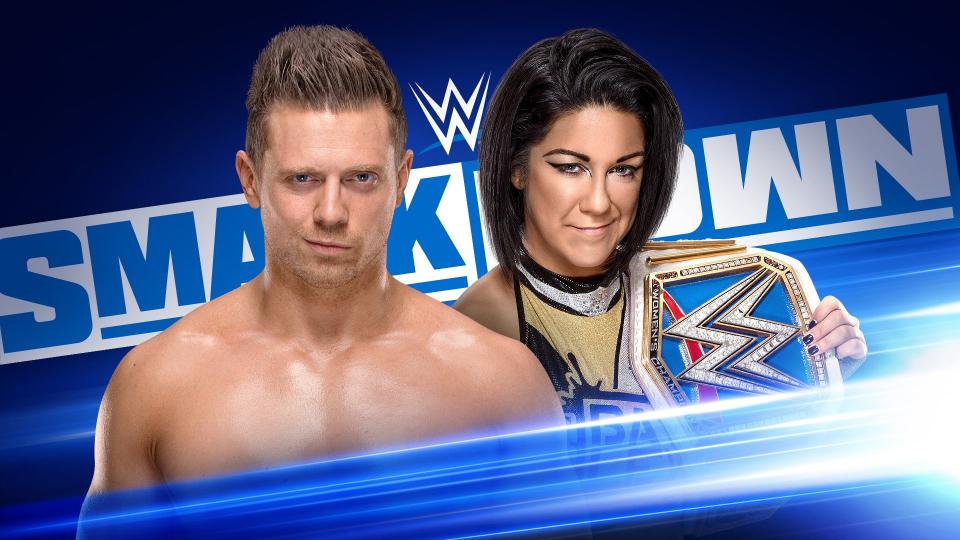 Roman Reigns will get a shot at the Intercontinental Title tonight as he faces Shinsuke Nakamura. This match could go anywhere, especially with Sami Zayn by Nakamura’s side.

Bayley will be on Miz TV and try to explain her heel turn.

The #1 contender for the SmackDown Women’s Title will be determined in a huge six-pack challenge match. Carmella, Nikki Cross, Sonya Deville, Mandy Rose, Lacey Evans, and Dana Brooke will face each other to see who will face Bayley at a later date.

The New Day will team up with Heavy Machinery to face The Revival and Dolph Ziggler & Robert Roode is also slated for the show.

It looks like they were able to put all of the SmackDown Superstars from the draft in the opening video.

Shinsuke fired the first shots with some stiff knees and a knee drop before Reigns nailed a boot and took control after an elbow. He drove Nakamura into the turnbuckles and then they traded shots before Reigns hit a Samoan Drop for a two count.

Zayn left commentary to help motivate Nakamura at ringside. Then Reigns tried to hit a drive-by, but Zayn pulled Nakamura out of the way. Then Shinsuke kicked Roman and sent him crashing to the mat.

Shinsuke continued to wear down on Roman until he fought back. Then Nakamura nailed a kick, but Roman caught him with a right off of a leap from the turnbuckle followed by a clothesline and another two clotheslines.

Roman nailed another kick and the crowd started to get behind him. He prepared for a Superman Punch, but Shinsuke grabbed an armbar. Then Nakamura transitioned into a triangle, but Roman powered out of it for a powerbomb and a two count.

Zayn got on the apron and caused a distraction so Nakamura took advantage of this situation. He hit a kick and a snap German suplex. Nakamura tried to hit a Kinshasa, but Reigns nailed a Superman Punch instead for a two count.

Just when Roman Reigns was about to hit a spear, King Corbin appeared and nailed him with his scepter.

Daniel Bryan ran down for the save and he laid out the heels after he did some damage. Then Zayn held Bryan so Nakamura could nail a Kinshasa.

The New Day cut a promo backstage where they were singing and Big E said he doesn’t want any children. Then Tucker showed up with a table and then Otis drank a bunch of gross things all mixed up in a bowl. Heavy Machinery, everyone.

Corbin was asked by Kayla Braxton backstage if he had anything to say after attacking Roman Reigns. He didn’t say a word before walking off.

They played a promo video for Chad Gable that explained why they call him Shorty. It was a nice bit of storytelling.

Axel took control early on in this match. He hit a Natural Selection for a two count and continued to work on Shorty. Then Gable got a two count off of a roll-up.

Gable avoided Bo Dallas on the outside and then reversed a Perfect Plex to grab an ankle lock for the submission win.

After the match, Kayla was in the ring and interviewed him. She was asking him about his height… she is about three inches shorter than Gable. He said it’s okay to be who you are and then he said “thank you” to anyone who ever screwed with him. He’s embracing who he is. Then he said that everyone should accept who they are. He accepts who he is. Now he’s Shorty G. It looks like they’re really using that copyright.

They asked Hogan via Skype what he’s gonna do about Seth Rollins dropping out of the match, brother.

Then he said Shorty G and Ali stood out. He also said we’ll have a big announcement at the end of the show. Hogan was fired up and his Skype connection was… an awful commercial for Skype and the internet connection in Florida.

Tucker and Ziggler started this off and Dolph quickly took control with strikes and a dropkick, but Tucker returned fire with a dropkick of his own. Then Otis took the tag. Heavy Machinery hit stereo suplexes on Roode and Ziggler next.

Then Big E and Otis “wishboned” Ziggler. The Revival were also sent outside with some suplexes. Then Woods nailed a somersault dive over the top rope. Roode and Ziggler returned fire with a devastating double team move on Xavier.

This match continued past the commercial break and the heels continued to take control. The Revival tagged in and out as they all took turns beating up Woods.

Woods started to fight back and he hit a missile dropkick on Ziggler. Otis and Roode took tags at the same time. Then Otis took everybody out. Roode tried to chop him, but Otis just humped the air. Then Otis nailed a splash and pancaked Zigler before throwing Roode and then he squashed Roode against the ropes before doing a caterpillar.

Otis caught Dawson off the rope, but Wilder got involved. They took Otis down, but only got a two count. Tucker took out Wilder and Ziggler on the out side. Then Otis lifted Dawson up and tagged Big E who took Dawson off his hands and then he tagged in Woods and hit a Midnight Hour for the win.