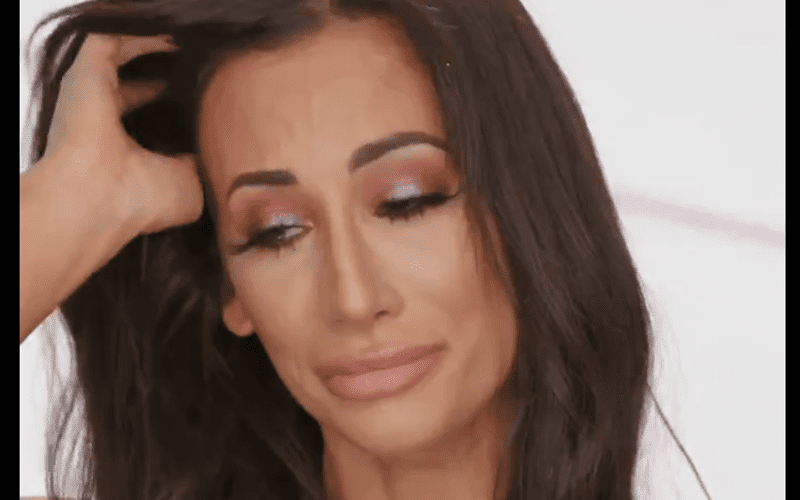 Carmella and Corey Graves surprised a lot of fans when their relationship went public. This also came with some people not understanding the situation and calling Carmella a homewrecker.

Graves’ wife aired out all of the dirty laundry on Instagram and that’s all people knew for a while. It wasn’t until later when it was reported that Graves and his wife were already separated and he was living outside of her house for months before a relationship with Mella started.

During Total Divas tonight on E! Network at 10:00 PM, they will tackle the Corey Graves and Carmella drama head-on.

In a very emotional interview during the show, Carmella weeps while talking about how people were looking at her strangely at work while Corey Graves received no such treatment. It was even worse when considering the undeserved hate she received from the fans.

“It’s like the hardest thing I’ve ever had to deal with I don’t even know how to deal with it because I’ve never been through anything like this. All I know is like I love him and like he loves me and we’re happy. I didn’t do anything wrong. I know in my heart I didn’t break up a family. I would never do something like that. I just don’t like that now the entire world thinks I did this horrible thing.”

At this point, WWE is mentioning Corey Graves’ relationship with Carmella offhandedly on commentary. It was quite a controversial topic for a while, but once the facts were known a lot of people had some apologizing to do who sent really mean tweets to The Princess Of Staten Island.