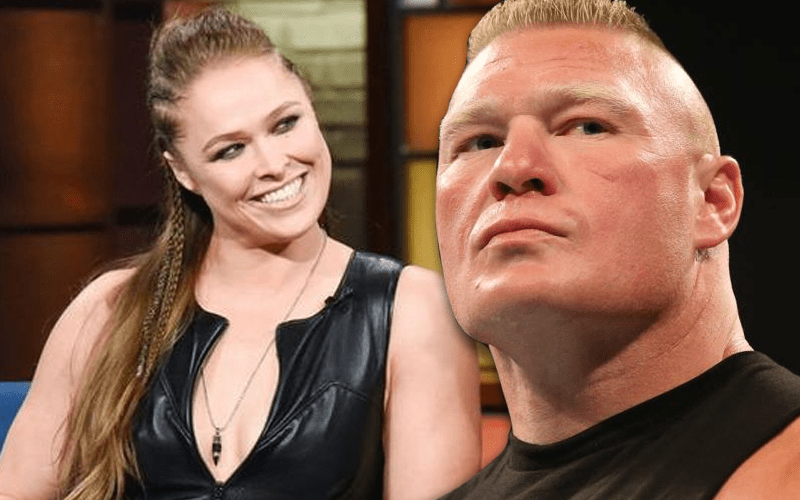 Brock Lesnar is set to wrestle Kofi Kingston on October 4th. This is a huge WWE Title match set for SmackDown’s Fox debut. WWE had their reasons for booking this match other than to possibly change the title.

Lesnar is also advertised for a SmackDown show on Friday, November 15th in Philadelphia. This is promoted as a “face to face” with Kofi Kingston.

During Wrestling Observer Radio, Dave Meltzer explained how Brock Lesnar’s appearance on SmackDown’s Fox debut could be thanks to the fact that Ronda Rousey isn’t available right now.

“Fox will be very interesting, especially on a Friday night. You know, especially since Brock is gonna be on Fox. I don’t know if he’s gonna be permanent, but I sure took that [advertisement] as a sign.”

“When you think about logic Fox probably wants Brock and Ronda and there’s no Ronda and now the second best, or the first best depending on your point of view for that sports person and everything like that [is Lesnar].”

It was noted that it’s hard to imagine that Kofi Kingston will be defeating Brock Lesnar on SmackDown’s Fox debut. Then again, as we previously reported Paul Heyman is also known for his legendary swerve angles.

Fox will bring a lot of attention to WWE, but they also need a big name on their show. Ronda Rousey might be busy, but WWE can certainly deliver on Brock Lesnar.