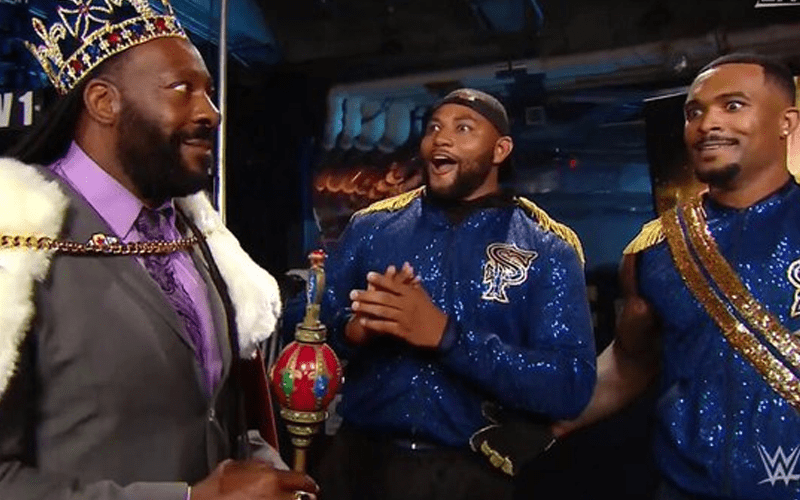 Booker T has a lot of advice that he can offer as a five-time World Champion and two-time WWE Hall Of Famer. It appears that he wants to help out another young team.

While discussing the Street Profits on his Hall Of Fame radio show, Booker T said that he’s considering pushing backstage to manage them. Montez Ford and Angelo Dawkins have a huge upside to their team already and they haven’t even worked a match on RAW yet.

“I’m thinking about putting my name in to manage the Street Profits. Bring these guys to the next level, you know what I mean? Just put a little bit more street on it, that’s all. Just put more street on them. It’d be no playing, no jiving. Just business. And that’s the thing, you know. I love to entertain.”

“That’s one of the best parts about the business is going out and entertaining. But when you can go out there and really put the [hurt] on them boys, then it becomes something totally different. When the people look at you differently, other than just an entertainer, that’s when it becomes something totally different to you, when you go out to perform. You actually feel it in the soul, deep down in one’s bones. That’s what I love about the business, and I think that’s what I can bring to the Street Profits.”

“I watch [Ford] go out there man, and the brother is very very talented. Agile, mobile, versatile. Can do it all. But you got to know how to slow ’em down, you know what I mean? When you got your horses and they want to run real hard, you’ve gotta say, ‘Slow down, baby. Let’s do this right.’ And that’s what those guys need, so I’m thinking about putting my name in the hat. Maybe not manage, but just mentor or something like that.”

Dawkins and Ford seem to be doing just fine without a manager right now, but you never know how having Booker T around could only help their team. King Booker has a lot of experience with tag team action being a part of Harlem Heat with his brother Stevie Ray.

The jury might still be out on how The Street Profits will fair on the main roster once they start wrestling, but Booker T is more than happy to help out where ever he’s needed.